Confusion has emerged as crypto exchange Liqui has decided to close because it is no longer able to provide liquidity for its users left.

In a statement on its website, the firm explains: “We also do not see any economic point in providing you with our services. However, we do not want to return to where we were a month ago. Hence, we decided to close all accounts and stop providing our services. It broke our hearts to do that.”

Liqui goes on to say that users will be able to withdraw their digital assets through its website within 30 days (from 28 January).

However, there are concerns from users on Twitter about this news. Some can’t get their funds out and some can’t submit a ticket to find a solution.

Like other firms in the crypto space, Liqui was hit by scam accusations due to delistings in September and October last year.

As users have pointed out, cryptocurrencies such as 0x (ZRX) and Basic Attention Token (BAT) were delisted for no apparent reason. Yet on Coinbase, which has garnered a reputation for reliability, these tokens were added and became more popular as a result.

At that time, some users called it a “scam”.

One user notes: “Because they’re running a scam. They hold all private keys to the assets but are hoping that at least 10% of funds will be left on their exchange for them to steal.” 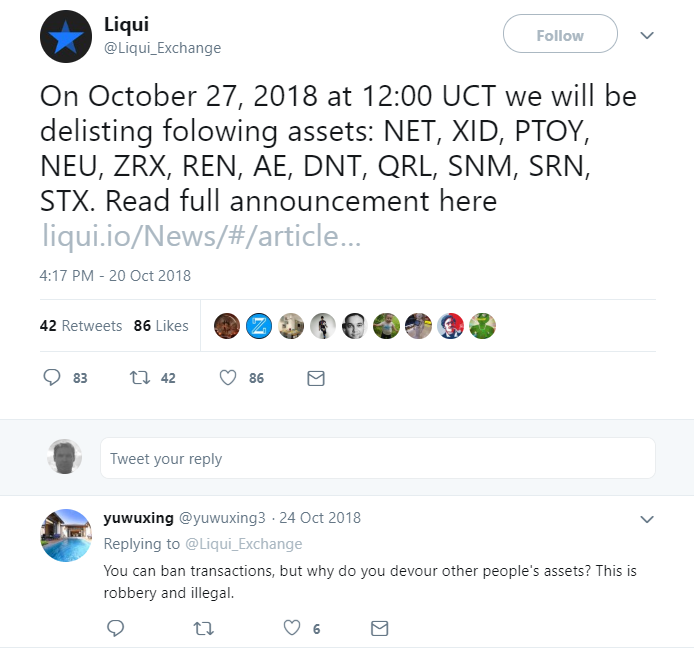 Liqui ends its message with a quote from Marianne Williamson (an American spiritual teacher): “Every ending is a new beginning. Through the grace of God, we can always start again.”

Some users may have something less spiritual to say about that.