In a healthy display of tech innovation power, Chinese companies have been dominating blockchain and artificial intelligence (AI) patents in 2017.

According to a new study by UHY, an accounting and consultancy network, 99 patents (32%) from a total of 314 filed with the World Intellectual Property Organisation (WIPO) in 2017 were by Chinese firms.

Rick David, chairman of UHY, comments: “Blockchain and AI could unlock significant economic growth over the coming decades, and businesses across the world are investing in making sure they benefit from that.”

He adds: “Where countries are lagging behind in areas such as these, governments should consider tax incentives to encourage increased research and development.” 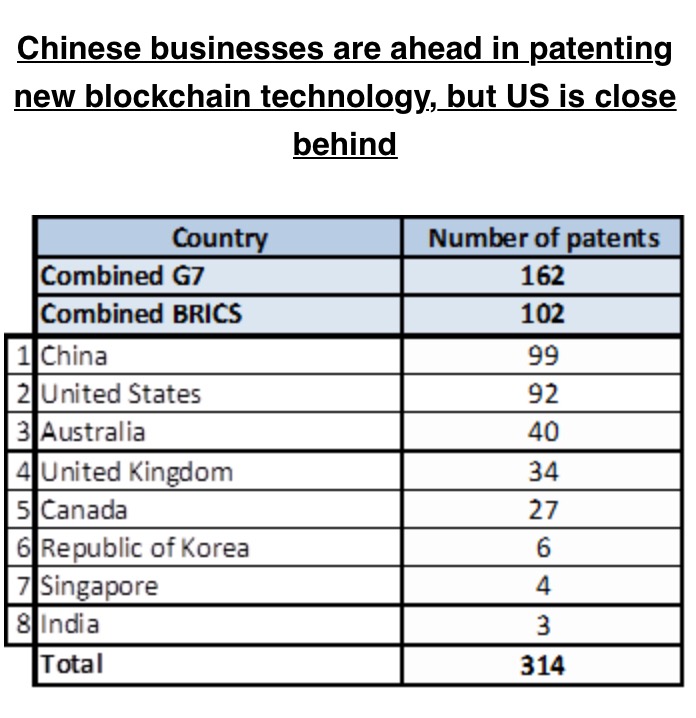 While that Chinese figure is impressive – and note that all this data is from 2017, US businesses were close behind with 29% of blockchain patents, followed by Australian businesses with 40 patents (13%). UK businesses filed 34 patents (11%).

UHY says that Chinese businesses have invested heavily in blockchain technology in recent years, with the nation’s central bank supporting the development of a blockchain-based trade finance platform to help SMEs access finance. Earlier this month, the China Banking Association was pushing trade finance on blockchain.

Bank of China also announced in August 2018 that investment in technology, including blockchain, would be 1% of the bank’s annual operating income.

UHY adds that the biggest filer of patents last year was nChain, a blockchain-focused research firm based in London and Vancouver, which filed 48 patents for blockchain technology at WIPO in 2017.

In the US, the largest filer was Mastercard, which filed patents for developments including a system for offline blockchain exchanges.

UHY explains that while European businesses have only filed a limited number of patents at the global level through WIPO, many have been more active at a local level.

For example, while German businesses have filed no patents for blockchain technologies with WIPO in 2017, there have been six filed with the DPMA, the German Patent and Trademark Office.

It wasn’t just blockchain where China was asserting its authority.

The study also shows that Chinese businesses lead the way in the development of AI technology, filing 473 from a total of 649 AI patents (31%) with WIPO in 2017.

China is ahead of its global competitors by some distance in the race to build portfolios of intellectual property in AI.

Its closest competitor is predictably the US (again), which filed 65 AI patents with WIPO in 2017 (10% of the total). Only two global patents for AI technology were filed in the UK.

UHY says that Chinese businesses like Baidu – often described as the “Google of China” – and technology and social media conglomerate Tencent are among the world’s leading developers of AI technology. Baidu filed the most AI patents at WIPO in 2017, with 183. 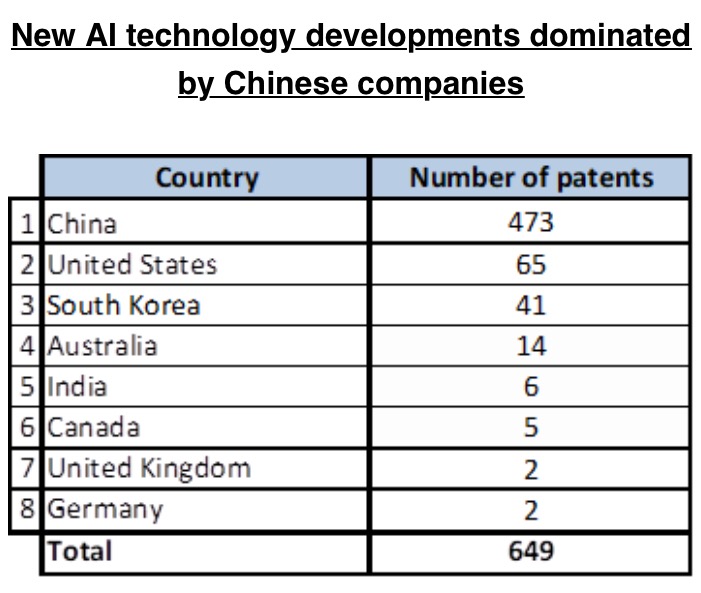