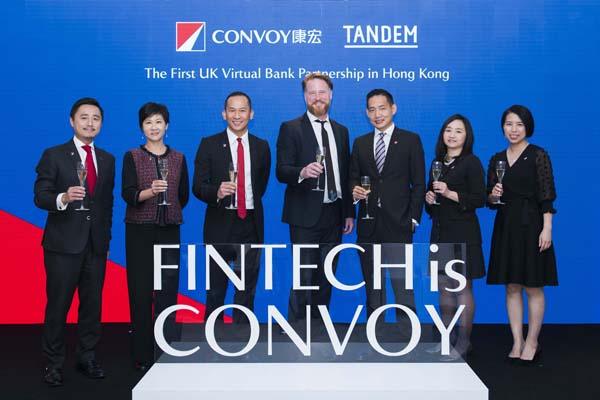 Some people hold drinks and smile

Along with the injection, they have formed a partnership. According to Convoy, this is the first-ever partnership between a Hong Kong financial services company and a UK “virtual” bank provider.

Convoy’s strategy is to focus on the “transformational opportunities of fintech and businesses”, and the partnership with Tandem builds on its existing investments in Nutmeg in the UK and CurrencyFair in the Republic of Ireland.

For both it’s a handy deal as Convoy plans to use Tandem’s tech to offer digital financial services to Hong Kong consumers and, in time, to launch a virtual bank, depending on regulatory approval and the grant of a banking licence.

Ng Wing-Fai, group president and executive director of Convoy, says: “Our partnership with Tandem is the culmination of an intense research and negotiation process. It underlines our aim to bring the most comprehensive financial management services and cutting-edge cybersecurity technology to Hong Kong.”

Ricky Knox, CEO and co-founder of Tandem, adds: “We see a powerful opportunity to significantly expand our presence in Asia, one of the most vibrant virtual banking markets, and begin the expansion of our banking services across the globe.”

It’s all a big change from August 2017, when Tandem received an emergency cash injection of £3.6 million from its investors when a major funding deal with House of Fraser collapsed.

Since then, it has moved on and made progress. It acquired Harrods Bank in January 2018, which brought with it £80 million of capital, a mortgage book and £400 million of deposits.

The battles between the UK challengers to gain dominance have been entertaining. You can view all of the banks here with our comprehensive list. (Maybe a Hong Kong version will be created later.)