Women in finance: an economic case for gender equality

Women are underrepresented at all levels of the global financial system, from depositors and borrowers to bank board members and regulators.

Our new study finds that greater inclusion of women as users, providers, and regulators of financial services would have benefits beyond addressing gender inequality. Narrowing the gender gap would foster greater stability in the banking system and enhance economic growth. It could also contribute to more effective monetary and fiscal policy.

Women on average accounted for just 40% of bank depositors and borrowers in 2016, according to IMF survey results published this year – the first time such data became available. Underlying these aggregate figures are large variations across regions and countries. For example, women accounted for 51% of borrowers in Brazil, compared with only 8% in Pakistan. 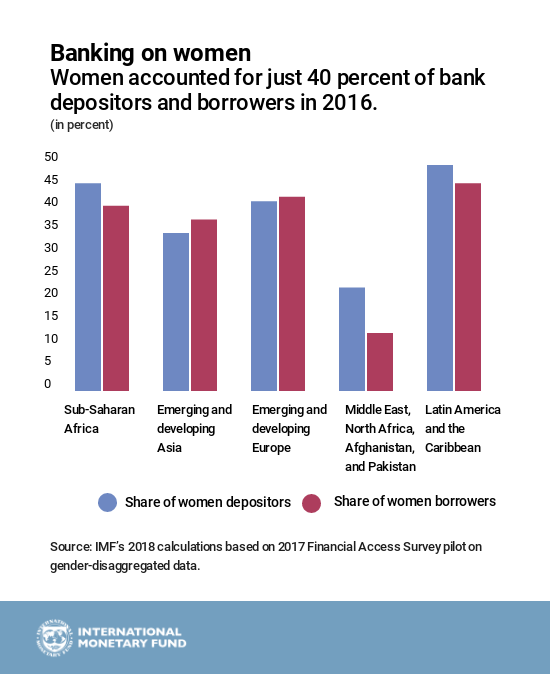 Growing evidence suggests that increasing women’s access to and use of financial services can have both economic and societal benefits. For example, in Kenya, women merchants who opened a basic bank account invested more in their businesses. Female-headed households in Nepal spent more on education after opening a savings account.

Such benefits illustrate why economic growth increases with greater access to financial services. The same benefits result from increasing female users of these services. More inclusive financial systems in turn can magnify the effectiveness of fiscal and monetary policies by broadening financial markets and the tax base.

When women lead in finance

What about the financial system itself? Does it matter whether women are represented among bankers and their supervisors?

In a previous paper, we showed that large gaps persist between the representation of men and women in leadership positions in banks and banking supervision agencies worldwide.

We found that women accounted for less than 2% of financial institutions’ chief executive officers and less than 20% of executive board members. The proportion of women on the boards of banking-supervision agencies was also low – just 17% on average in 2015.

As with users of financial services, we found considerable regional variation in the presence of women in banking leadership roles. Sub-Saharan African countries had the highest shares of female banking executives, while Latin America and the Caribbean had the lowest. Advanced economies were in the middle. 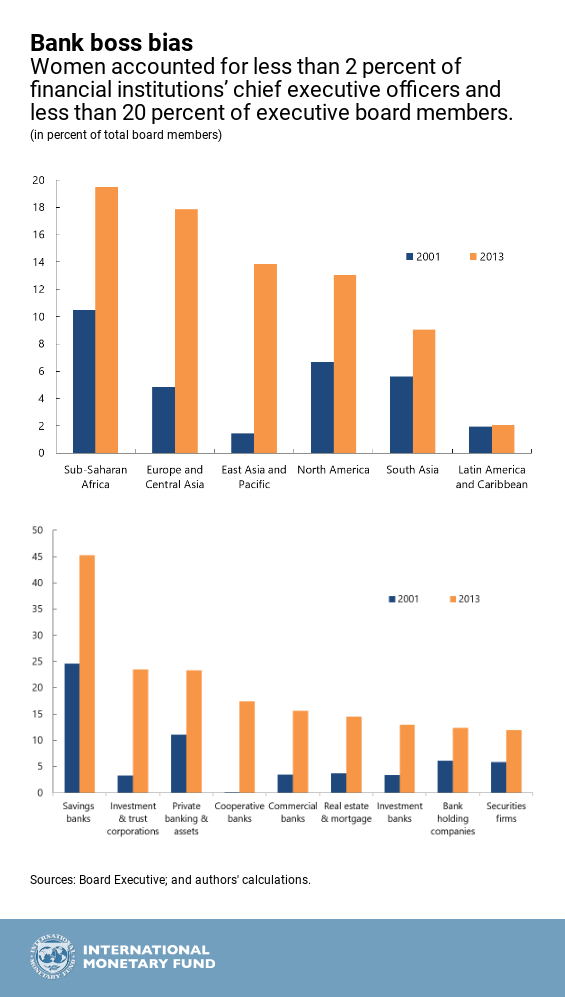 We found that the gender gap in leadership does make a difference when it comes to bank stability. Banks with higher shares of women board members had higher capital buffers, a lower proportion of nonperforming loans, and greater resistance to stress.

We found the same relationship between bank stability and the presence of women on banking regulatory boards.

What can explain these findings? There are four possible reasons why a higher share of women on bank and supervisory boards may contribute to financial stability:

Based on evidence in our paper and related literature, we find that the observed higher stability is most likely due to the beneficial effects of greater diversity of views on boards, as well as discriminatory hiring practices that lead to hiring better qualified or more experienced women than men.

Our findings strengthen the case for financial inclusion of women to enhance economic growth and foster financial stability.

We need more research and better data to explain how to achieve these benefits and to identify the conditions that facilitate the entry of women into leadership roles in banks and supervisory agencies.

This article was originally published on the IMF Blog