London-based virtual money assistant Cleo has got something to shout about as it has received $10 million in Series A investment.

The funding round was led by Balderton Capital, with follow-on investment by LocalGlobe. Balderton joins investors that include Niklas Zennström, founder of Skype, and Taavet Hinrikus, founder of TransferWise. This takes Cleo’s total investment raised to $15 million, since being founded in 2016. 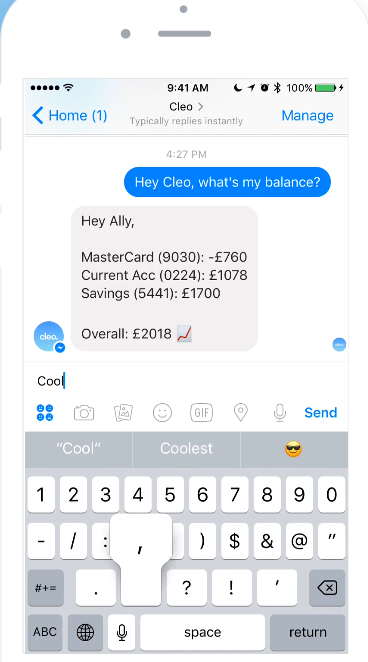 Cleo, which last year called itself the “Siri of personal finance”, lets users connect their bank accounts. The app sits on top, giving customers insight into their spending data.

With the new cash, the company is now set to launch its own range of financial products.

Cleo CEO Barney Hussey-Yeo points out that “from overdraft fees to credit cards, the traditional range of financial products doesn’t work for this generation. The model of retail banking is not set up for the people it serves. Cleo’s changing that”.

The firm also plans more expansion internationally, following a launch in North America in April 2018, which saw 350,000 people sign up within four months.

Predominantly aimed at millennials, Cleo says its users talk to “her” in Facebook Messenger, where “she creates a daily relationship between them and their money”. This could make for an interesting SF novel or film if we let our imaginations run wild.

According to the firm, it has over 600,000 users, with 94% aged under-35. The artificial intelligence (AI) has a “fun, wry, and relatable personality”. Cleo sets targets, tracks spending, puts away savings automatically, and answers questions instantly.