“Cash is not dying it is being murdered.” 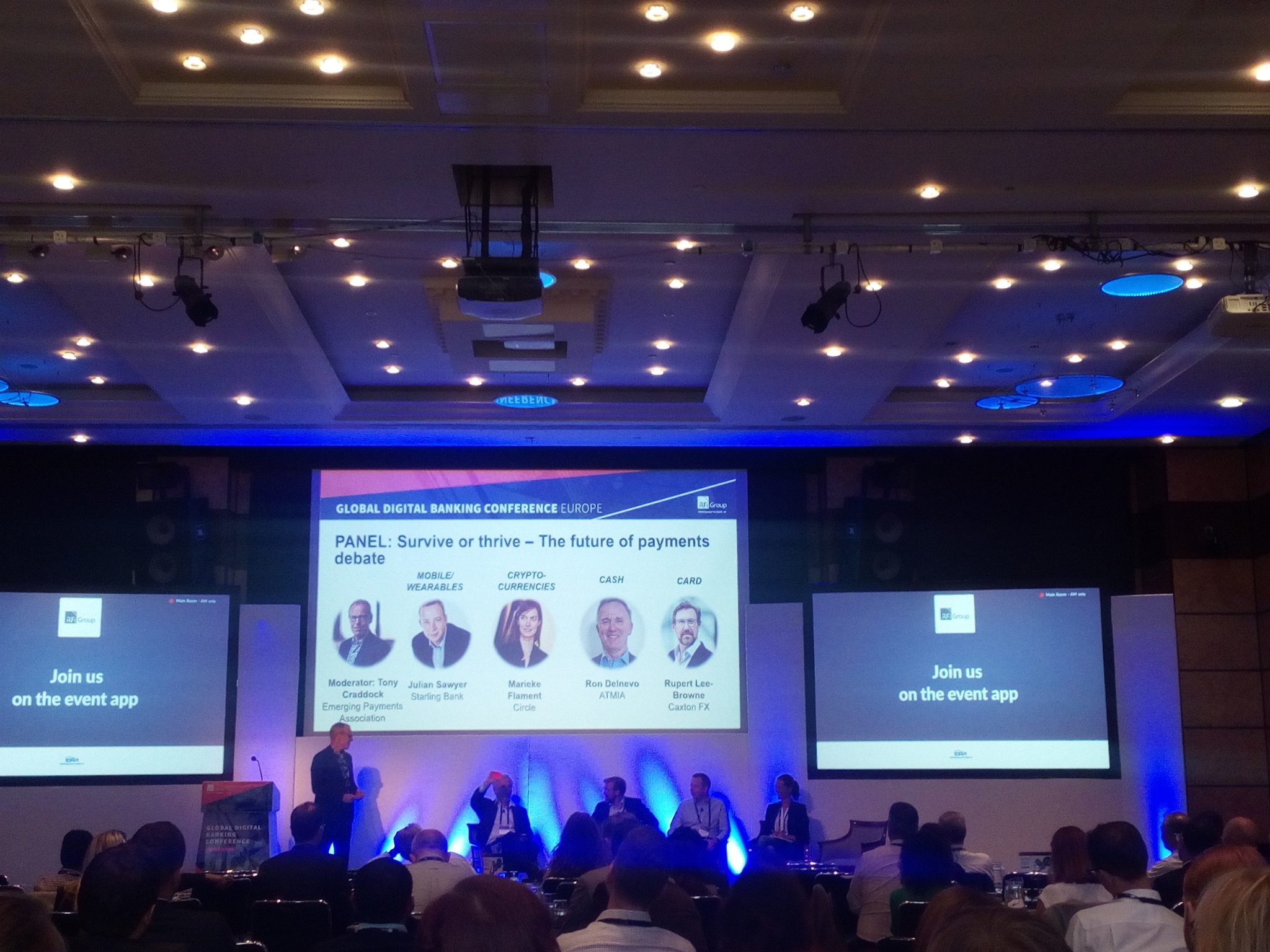 This was one opinion from a lively and good-humoured debate on payments at RFi Group’s Global Digital Banking Conference (GDBC) – Europe 2018.

At yesterday’s (13 September) event, held at the Grange City Hotel in London, it was a mix of big name banks and newer digital ones mainly going over old ground. But not all the time as you’ll find out.

The first report looked at how fintech ain’t that cool and the Liv banking app in the UAE. This second one contains the best debate and final presentation I’ve seen on the fintech circuit so far. All on the same day.

A quick audience poll at the start showed that in ten years’ time the most common payment method would be wearables/mobile with 70% of the vote.

Delnevo was the loudest in his views and arguments for cash. He explains there were 400 million cheques in the UK last year, and there were also 38 billion payments.

“Cash is not dying it is being murdered,” as he memorably put it. He feels people still need it and want it, if given the chance. Perhaps not a view backed up by the number of fintech start-ups tapping into mobile and digital payments.

As the challenger bank representative, Sawyer was naturally against cash – citing its use of animal fat as one reason to stop its usage. Interesting.

For Flament the cryptocurrency argument was clear. We are on the “verge of tokenisation, where every asset can be digitised and done on the blockchain”. She notes that crypto prices do fluctuate, but with more stablecoins being released (e.g. Paxos’ recent PAX) and which are backed by the US dollar, they are the future.

Because they had to argue it made for an ideal, witty and proper debate. A rarity in the fintech world.

By the way, when they showed the audience poll again, wearables/mobile had slipped down to 56%.

Following those people with actual opinions, the finale brought on someone else who can speak their mind. 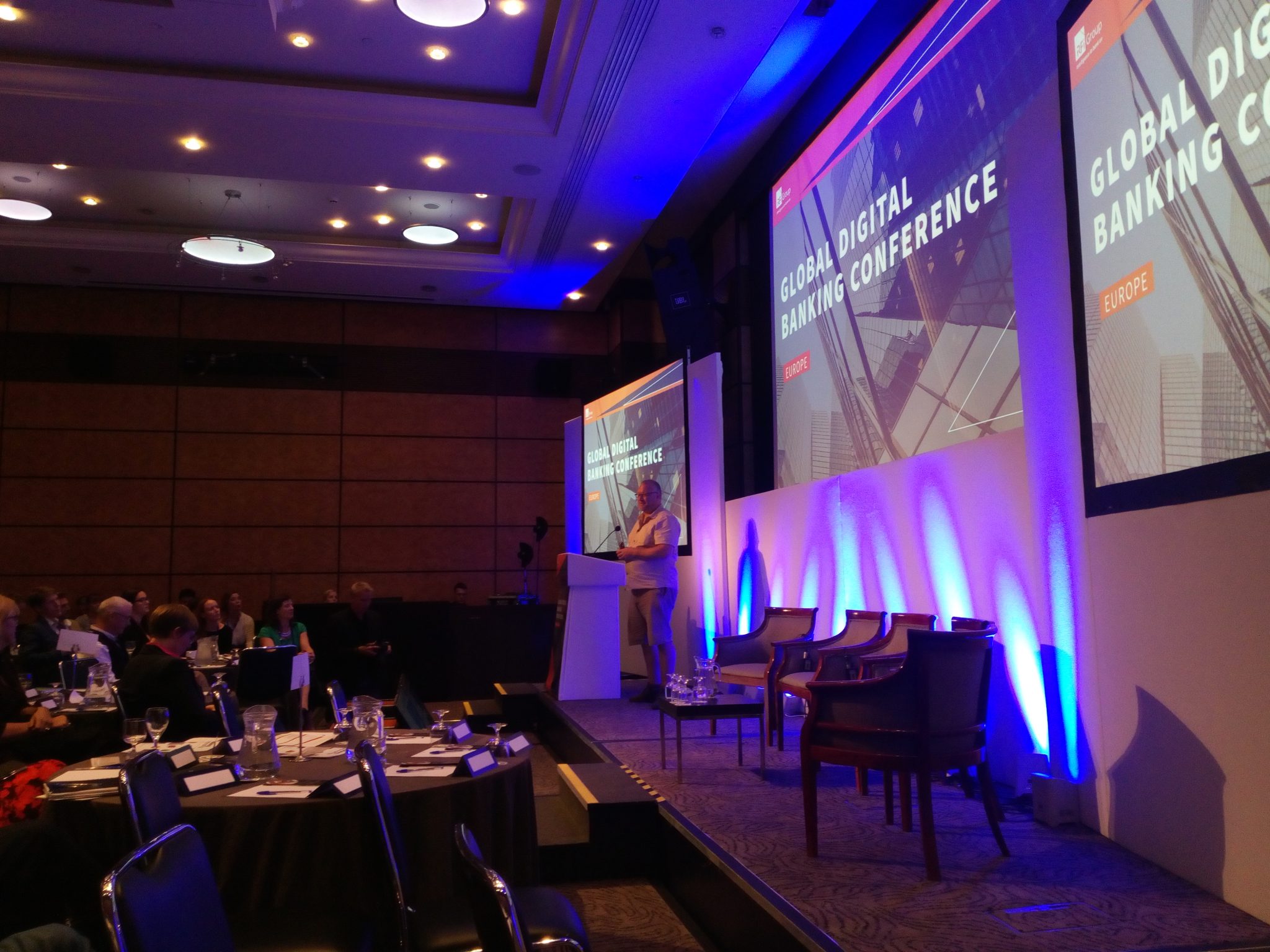 This wasn’t a speech full of wishy-washy, lentil-eating, hug-everyone nonsense, but just his view on how innovation can be done. The audience loved it.

Cross points out that “innovation is not technology but people” and it’s “solving a problem in an elegant way”.

The bank does not take equity in start-ups – “why take a piece of someone’s dream?” – the idea is that “everyone gets fed”.

You may think this isn’t profitable or just noble rubbish, but Cross is a pragmatist: “Being nice is good for business.”

If DBS is encouraging innovation and trying to be kind, firms will want to partner with them and staff will want to stay with them.

For example, he explains that a staff member came to him with an idea to turn interns into “entrepreneurs”. This is now called the DBS Uni.corn Management Internship Programme.

The idea is that staff members can get a three-month “sabbatical” and money to start their own start-up.

HR did ask Cross what he was doing as it could lead to employees leaving the bank. He joked that a CIO is someone who’s “slowly getting fired while effecting change”.

But again, realism comes into play. He says nine out of ten start-ups fail, so if someone leaves the bank to try for their dream they lose their job and DBS loses a valuable person.

With this Uni.corn model – staff can try, possibly fail, but stay within the bank if that happens.

It was a very convincing speech and the audience were impressed and entertained. Whether that translates in to other banks adopting the model, remains to be seen. But DBS feels it has proved a point.