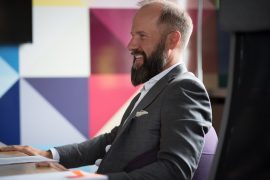 Balázs Vinnai, W.UP: “time is ticking away for banks”

W.UP, a Hungary-based digital sales company for banks and financial institutions, has appointed a new president Balázs Vinnai, who is also the company’s investor.

Vinnai’s remit will be “helping international banks become champions in digital sales and get ahead of digital-native rivals”.

Vinnai, who comes with over 20 years of experience in the banking tech space, was most recently chief digital officer at Finastra. He also was co-founder and CEO of digital channels solutions firm IND, which was purchased by Finastra (Misys at the time) in early 2014. IND’s technology formed the basis of Finastra/Misys’ front-end digital proposition.

Vinnai is also the co-founder of Codecool, a coding school in the Central and Eastern European region.

“Time is ticking away for banks. I’ve seen hundreds of digital transformation attempts and most banks are struggling to get real results. It’s quite clear what makes or breaks these projects. First and foremost, understanding customers and their needs is still not their main focus,” Vinnai observes.

“By now, most CEOs are well aware that they have to digitise their offerings and business models if they want to stay competitive. But if their middle management isn’t on board, the entire organisation gets stuck.

“And those banks that do decide to embark on this journey spend millions at big-name suppliers on slow and complex projects just to work around their legacy systems and avoid risks. Rather than look for new solutions that would make a real difference on the customer engagement side,” he notes.

W.UP was founded in 2014 in Budapest. Its flagship offering is Sales.UP, a digital sales and engagement platform (it also won the Best of Show award at the latest FinovateEurope conference). The company says it generated revenue of nearly €7 million last year.