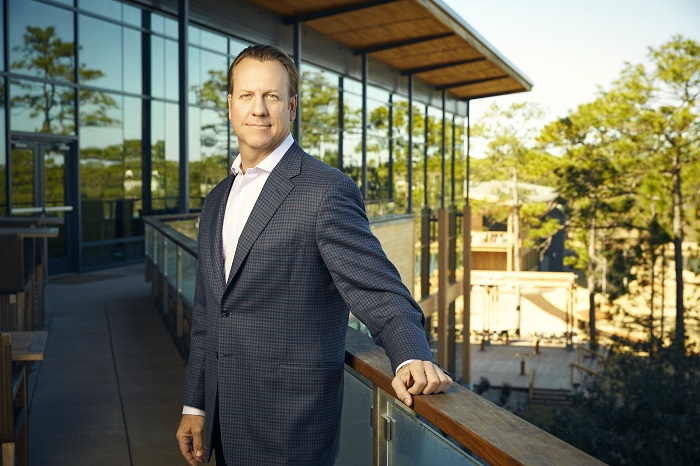 Neil Underwood, Live Oak Bank: “When we looked to build out our next generation digital bank, there were no suitable core systems”

The US, in particular, is in urgent need of new core offerings to support next generation digital banking. Can an offering being built by one of the early core system pioneers, Frank Sanchez, fit the bill? Live Oak Bank, an investor and first client, clearly hopes so. Martin Whybrow spoke to the tech-savvy bank and the start-up supplier.

Live Oak Bank views technology as one of its differentiators. Which is a challenge when considering the core. The US market is dominated by ageing commercial core systems that mostly now reside in the hands of just a few large suppliers, as a result of vendor consolidation. Customer satisfaction is low and there is little to be gained, aside from stress and cost, from replacing one with another. Over the last decade or so, the main driver when talking to US banks that have gone through replacements seems to have been complete exasperation with their existing supplier, rather than a sound business case.

Wilmington, North Carolina-based Live Oak Bank has developed its own systems for other areas of its operation and, in a couple of instances, it has successfully spun off these (nCino for CRM and loan origination; Apiture for online banking, with a next generation version of the latter on the way for Amazon’s AWS cloud).

The bank also uses a bill payment system, Payrailz, a big data cybersecurity solution called DefenseStorm, and is implementing a debit card system, Greenlight. These are third-party offerings (in contrast to nCino and Apiture) that are backed by the bank’s venture capital arm, Live Oak Ventures. “We are searching every day on the venture side,” says Neil Underwood, president at Live Oak Bancshares, and cloud-based design is a common thread running through each.

In addition, Live Oak Bank recently announced a joint venture with payments services provider, First Data. The bank has been working on new solutions for merchant services and, alongside the online banking and bill payment products, these will be made available via First Data’s online banking tools, derived from FundsXpress, an acquisition around a decade ago.

However, for all of this innovation, there was still the question of how to overhaul Live Oak Bank’s core operations. The idea of building a new core was deemed a non-starter, says Underwood. The scale and complexity of the task were the main prohibitors. “We would have failed,” he concludes.

Having rejected the in-house route, a search of the market proved fruitless. “When we looked to build out our next generation digital bank, there were no suitable core systems,” says Underwood.

Chip Mahan, Live Oak chairman and CEO, has a long relationship with Frank Sanchez, developer of one of the old core systems, Profile, which today resides with FIS. Profile became one of the stalwarts of the US market but was unusual in that it also succeeded on the international stage. Out of the discussions between Mahan and Sanchez came a plan for the latter to build a next generation core system, with an initial $12 million raised to support the venture and with Live Oak Bank lined up as the first taker.

That system has, naturally, taken longer to build than planned – there has arguably not been a new offering in the history of the core banking system market that has arrived on time. However, Live Oak Bank expects to go live, after a phased “friends and family” pilot, by the end of this year to cover, among other things, its DDA and savings business, with loan accounting to follow next year.

The bank expects to start using the system for all new accounts and, once everything is stable, will migrate existing accounts, which Underwood predicts will be mid-2019. “This will be at the right time, when we feel confident.”

In terms of the delays, “Frank had very aggressive plans to start out with”, says Underwood. However, “internally, for our shareholders, we set expectations as some time this year”. The development teams of the bank and supplier have worked closely together, he adds.

Sanchez’s company, Finxact, is based in Jacksonville and was set up with initial capital of $12 million. Sanchez describes what is happening today as the second wave of digital banking, following the investment in channels and new banks from 2000. Today’s wave is focused on mobile and much more seamless integration between payment beneficiaries and recipients.

The demand is for systems that are truly real-time and can support a potentially massive increase in volumes, he says. The individual values of transactions will decrease as digital banking matures, so volumes will increase, he predicts. Data analysis and business intelligence are also key areas of focus.

However, “banks are responding by saying, I can’t put this on top of my current infrastructure”, says Sanchez. There are also major frustrations about costs, he adds. And he no longer sees a resistance to cloud deployments, with widespread recognition of their flexible and lower cost benefits.

The Finxact system is being built for AWS although could support other options. It is meant to be real-time and event-driven. The design is centred on inventory, meaning any attribute whether a traditional currency, electronic currency, security, physical asset and so on, rather than the customer account. This eases the ability to support new financial instruments, says Sanchez. In terms of openness, Finxact was the first banking system supplier to sign up for the Linux Open API Initiative which seeks to define a vendor-neutral description format for APIs.

Finxact is using the Google-derived open source Golang high-performance language and SQL alternative databases, with non-SQL options to follow. Sanchez describes the architecture as “container-based” so the system can be implemented on the cloud but also on any machine, so will be deployable in-house.

Sanchez admits that the development has taken longer than he would have liked. He points out that this is very new technology with a currently relatively small developer community. The development is being done in the US and Thailand. He also blames the delays on a broader scope than initially planned. When Finxact started talking to banks towards the end of 2017, the feedback on the APIs and design was very positive, he says, “but they asked, where’s the branch system, the reports, the screens, really we need to run a bank, please fill out the picture for us. We have, but this has taken time.”

In part, he believes this demand for an end-to-end solution, along the US’s traditional service bureau lines, stems in part from the fact that often the platform will be restricted by the slowest component. “It could easily be a sub-optimal mixed bag.” While Finxact’s system will have open APIs, third-party systems would need to be API and cloud-enabled as well to gain the full benefits. Thus, the more functionality within the single stack, the better.

As well as providing the system, Finxact intends to market the underlying banking model and schema to users, partners and consultants, to use to build other financial products and to extend the standard functionality. The developments could be made more widely available through an app store-type model, he adds.

Although the initial focus is the US, it is Sanchez’s plan to also offer the system internationally, with one investor in Thailand (a former distributor of Profile) a likely initial partner. In the US it currently has 16 staff, having “cherry-picked” the best service and engineering resources from US competitors, he says. As the need arises to support the first customer, so the staff numbers will increase and he also anticipates a second round of funding.

What will be the benefits for Live Oak Bank? The “API-first design methodology implies massive flexibility”, says Underwood. This should allow much better interaction with other systems. “Exposing the entire core, securely of course, will allow us to build out solutions for our customers.”

Ease of integration is intended to be a key gain. Linking, for instance, Apiture to the bank’s current core, Fiserv’s Premier, for account opening involves 62 calls to and from the core, says Underwood. This took 18 months to build and still has problems, he says. With Finxact, he expects this to be replaced by a single call and response.

Another benefit for Live Oak Bank cited by Underwood stems from the native AWS design, bringing reduced costs and much greater scalability as the bank expands. “Our goal is better customer experience but to do it for far less.” He estimates that the cost per account on Finxact compared with Premier could be one-tenth.

It is easy to predict that some or all of the Live Oak Ventures systems might be offered with Finxact. A “bank-in-a-box” turnkey platform has been touted for decades but this has been “laughable”, says Underwood. He believes that it could now be a reality, in a pre-integrated cloud-based form.

There is interest from the market in the development, says Underwood, including discussions with CEOs of some large financial institutions and with a number of banks starting to carry out due diligence.

Of course, the hoped-for benefits are unproven and promising-looking new core systems have sometimes failed to live up to the hype or have failed altogether. Whether Sanchez can deliver this time around remains to be seen, for all of his previous experience. However, whether from here or from other sources, no one – apart perhaps from the few incumbent heavyweight suppliers – would argue that the US market isn’t crying out for new options. And much the same goes for the rest of the world as well.