Blockchain and the notaries: the services won’t be replaced but transformed

It’s a widespread mistake to think that blockchain is the panacea for all kinds of problems. It is believed to replace banks, lawyers, central banks, facebook, passwords and even the Internet. And this is not a joke, these are actual questions that people ask google. Maybe they might hesitate to ask someone else about it… 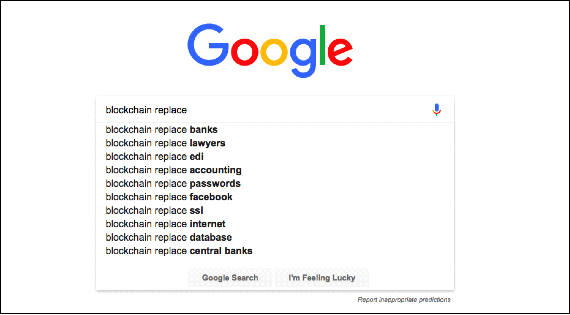 In this article, we would like to cover a yet another “blockchain replaces whatever” topic and it’s about, you may guess, notaries. The funniest thing about this one is that a person who claims that blockchain will eventually replace notaries and the one who says that it won’t may both, in the actual fact, refer to literally the same idea. This happens because of the different perception levels they’re speaking on.

The plan of the article is very simple: consider what the notaries do, figure out what blockchain’s capable of, and conclude how it may actually transform the notarial services (the fact is that it actually can and very probably will).

In a general sense, a notary is an independent, even-handed witness that documents the presence or absence of a certain fact. In practice, the notary:

It is worth noting from the very start that it is possible to automate some processes (forego notaries partially) in the first two cases — when you deal with documents and/or signatures. Algorithms may well manage these processes in the nearest future. However, there’s nothing you can do about determining facts from the real world (at least, not yet).

Laws in certain countries imply that the children under 18 can go abroad without their parents only if this fact is notarised. In such case, the notary is that specific even-handed witness that verifies who is that the child goes abroad with, whether the parents agree with that, and whether it’s all done according to everybody’s will.

Blockchain can only automate this process by providing the authenticity of digital signatures that parents provide. Yet, it doesn’t help with ensuring that parents were clear-headed at this point in time. There should always be some responsible party in the name of some doctor, notary, etc that would verify the quality of the ongoing procedures.

Blockchain is a new way of managing the database. Specifically, it allows you to build an accounting system that is managed by independent or partially independent parties. While the traditional approach to database management implies that there’s always someone who controls everyone else’s data.

When we say “data”, it’s not only about some information like that from social media, but also a financial data or anything valuable from the real world that is stored in a digital way. 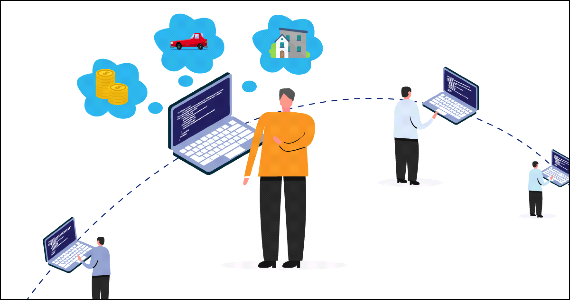 The main aspects of the blockchain-based accounting systems are the following:

P.S. Now you see that the google search showing “blockchain replace accounting” is the most fun because it’s the same as “wheel replace vehicle”.

Such a flexible data alignment allows automating certain processes, upon that, enhances the level of security and reliability, in general. Obviously, it has made many people thinking that with the blockchain we’ll be able to manage everything valuable (including documents) ourselves. That’s kind of true, but doesn’t mean that the role of notaries or other middlemen disappears completely.

Blockchain cannot guarantee the authenticity of the data across the board. 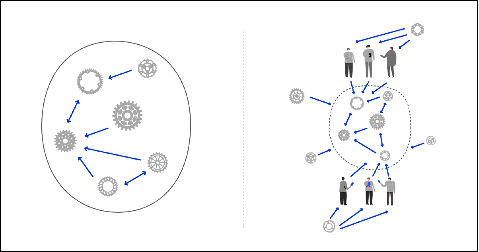 What you see on this picture is the abstraction of the two databases (to be precise, mechanisms of the databases): one is completely self-sufficient, the other one is not.

The database that doesn’t have any dependencies from the real world. All the operating mechanisms are based on the data that’s already stored within this database.

Correspondingly, each piece of data may only have dependencies with other internal data and never interacts with the “external world”. That’s the Bitcoin case: BTC coins is the data that was mined in the database. The transactions transfer coins from one address to another, while the system doesn’t have any necessity for, so-called, gates to the external databases.

And that is one of the primary components that may allow the system to be self-sufficient and ultimately eliminate the middlemen. In this way, blockchain can guarantee certain authenticity of data, though, technically, it only provides a robust solution for users to ensure it.

The database that has dependencies from the outer world (the fact is that most systems do have). And, it’s precisely the middlemen that ensure this outlet, provide the gate that connects one database with another, sometimes even insert or approve the data manually. In the blockchain case, they are called oracles – trusted or partially trusted parties that collect data “from within” and enter it into the database.

So, if your accounting system deals with something from the exterior world, blockchain won’t exclude the middlemen. Speaking about the facts from the real world, you always need someone who would verify them and register in the main database, no matter whether it’s on the blockchain or not.

Why does blockchain make sense then?

What actually makes sense is the data reconciliation between independent parties that blockchain allows for. It will change the very ecosystem of our interaction with the middlemen (in our case, notaries) because there will be a certain amount of the independent ones who will be fulfilling certain work. The result of the work will be more authenticate because independent parties are less likely to collude with each other. 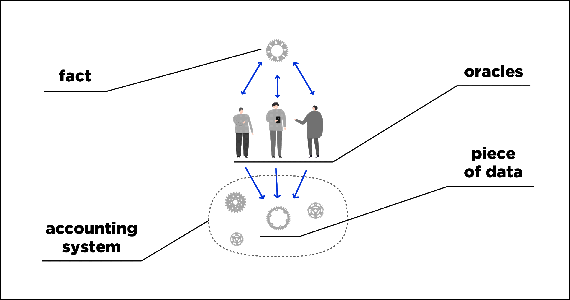 The example: imagine some blockchain-based debt-obligation registry. Bills of debt have much more weight when are notarised. The blockchain ecosystem will allow for the multiple verifications of one document by various independent validators (call them whatever you want: oracles, notaries, middlemen, etc). In this way, you have much more guarantees that all the documents (bills of debt, in our case) are authentically digitised. They are not just legitimate according to some centralised entity (that practically can legitimate anything it wants to) but are actually competent and consistent because are verified by the independent parties.

The direct work that notaries do won’t go anywhere, rather, will be transformed. To be precise, the very way this work is done will change. That said, some of the processes will become more automated and will exclude the human involvement. For example, the verification of signatures. Machines may well do that in the near future. However, some processes cannot replace humans with algorithms, such as determination of facts from the real world.

“The” is being added to highlight the importance. 🙂 By now, you are fully armed with all the required knowledge and are completely ready to make this conclusion. And it’s not just an opinion. It’s a rock-solid fact.

It solves most problems related to the accounting process and the process of reaching consensus among all the involved parties considering the state of data (documents, expiration date, who is the signer, etc). Blockchain allows for building a transparent and an easy-auditable accounting system, where the chance of backdating is exceptionally low. This means that once your document (or any other valuable information) is validated and inserted in the database you can be sure that it won’t be unauthorizedly altered.

It doesn’t solve everything that has to do with the process of manual verification of data and certain interaction, such as the taking of risks and responsibilities, maintaining of servers and interfaces, and so on. There is no way around this work. And it’s not blockchain that will be doing it, but people, namely, certain responsible parties in certain accounting systems.

Blockchain doesn’t exclude the responsible parties in cases when the database is non-self-sufficient (you already know that most of the databases have dependencies “from within”). Yet, it reduces the necessity of trusting these responsible parties as much as we do now. It allows for building the ecosystem, where you have a certain amount of parties that act independently. And, this works with everything, whether it be the notarial services, public registries, supply chains, voting platforms or other platforms/services/businesses that deal with any data manipulation.