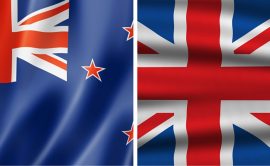 While Australia and the UK have established a “fintech bridge“, New Zealand fintech companies looking to expand into Britain and vice versa don’t yet have an equivalent link.

George McLellan and James Walsh from law firm Fieldfisher look at how Kiwis and Brits are exploring other ways to participate in each other’s markets.

Numerous New Zealand-founded fintech firms are eager to establish divisions in the UK in order to scale up their operations in Britain’s much larger market.

At the same time, British fintechs, including challenger banks, are eyeing up Australasian financial markets, which have historically been tightly protected and suffer from little competition, particularly in retail finance.

As mentioned earlier, in March this year, Australia and the UK established a fintech bridge. The purpose of the bridge is to bring the British and Australian Governments closer together in their regulation of innovative financial products and to begin to reduce barriers to entry in both markets.

This fintech bridge is a logical first step towards establishing equivalency in financial services through a free trade deal between the two countries.

New Zealand and the UK do not yet benefit from a fintech bridge, though there is substantial interest in such a link going both ways, and many are hopeful that an arrangement can be swiftly established.

In anticipation of a bridge or equivalent trade agreement, regulators and industry bodies on both sides of the globe are making efforts to strengthen Kiwi-British business links in the fintech space.

Opening up the sandbox

Initiatives such as the UK Financial Conduct Authority’s (FCA) regulatory sandbox, launched in 2016, are proving popular testing grounds for some fintech businesses.

Although the sandbox is currently UK-focused, foreign fintechs can in theory participate on a branch basis, as an alternative to setting up a UK entity.

There are also discussions underway about potentially establishing a “global sandbox” with the cooperation of regulatory authorities from around the world, with whom the FCA has bilateral cooperation arrangements. This would allow a firm’s sandbox tests to span two or more jurisdictions.

By participating in a sandbox, companies can reduce the time and cost of taking innovative technologies to market, while giving regulators the opportunity to identify relevant consumer protections and ensure these are built in to new services.

The EU’s General Data Protection Regulation (GDPR) has provided a perhaps surprising opportunity for New Zealand Fintechs looking to operate in the UK and Europe.

New Zealand is one of just 12 non-EU countries around the world that has been awarded EU “adequacy status”, meaning it is deemed to have an adequate level of data protection that measures up to the GDPR standard.

Having this status means that personal data can flow from the EU (and Norway, Liechtenstein and Iceland) to New Zealand, without any further safeguard being necessary – a helpful boost for fintechs.

Under GDPR itself, new rights such as data portability provide opportunities for new and innovative companies to challenge major banks, while the flexibility of their new technologies and lack of legacy data issues mean they also have a relative competitive advantage.

Open banking is the UK version of a sweeping piece of European legislation known as the second Payment Services Directive (PSD2). Its intention is to get the biggest UK banks to open up their data, which could mean big changes for the way individuals and businesses use money.

The new law is expected to benefit challenger banks seeking to offer faster, more nimble and cheaper ways for consumers and businesses to access products such as mortgages.

Buoyed by the promise of much broader data access, fintechs in the UK and New Zealand are sizing up opportunities in each other’s markets, where large established financial institutions remain dominant.

Several different kinds of agile and increasingly efficient fintech business models are starting to emerge as a result of PSD2 and it will be exciting to see how the growth of open banking technologies in the UK and Europe sets the pace for fintech hubs like New Zealand to follow.

With significant uncertainty hanging over whether UK financial service providers will be able to continue trading unimpeded with Europe post-Brexit, London’s attractiveness as a hub for fintech firms might seem questionable.

Equally, with a population of less than five million people, around half that of London, New Zealand looks like rather a narrow opening for British would-be market entrants seeking to substitute for the potential loss of EU customers.

However, it continues to be significantly simpler for international businesses, especially Asia-Pacific companies, to set up a business in London rather than in Europe, thanks to the local talent pool, data network infrastructures, the robust civil justice system in England and Wales, the stability of British institutions and the timeless dominance of English as the world’s language of choice.

Many fintech companies still want to be based in the UK for these reasons, so for these businesses it is about setting up a plan B – to help them retain a base in London while ensuring they have a presence in Europe.

Ultimately, regardless of geopolitical shifts, the result of technological development, in financial services as elsewhere, has been to bring the world closer together – a trend that shows no sign of abating.

About the authors: George McLellan is an associate (New Zealand Qualified) in Fieldfisher’s regulatory group, and James Walsh is a partner in Fieldfisher’s technology and outsourcing practice. Both are based in London.