The UK’s fintech investment in the first half of 2018 hit a record $16 billion, ahead of $14 billion in each the Americas and China, according to KPMG’s report “The Pulse of Fintech 2018”. 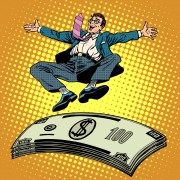 In the same period, investment in companies in Europe (including UK) hit $26 billion, a total of 198 deals. Some of the largest among these are the acquisitions of WorldPay by Vantiv and iZettle by PayPal, and buyouts of Nets and IRIS Software.

The UK has four of the region’s top ten deals over the past six months, which is attributed to the efforts that the UK government is putting to boost the sector. The report forecasts investments increasing in areas like regtech, insurtech and wealth management.

Interestingly, although the total value of the deals globally has increased to $57.8 billion in investment, the numbers of deals closed is lower than last year for the same period, and not too different from 2016.

Globally, Ant Financial in China leads the venture capital firms with the highest investment, at $14 billion, followed by Worldpay ($12.9 billion) and Nets ($5.5 billion).

KPMG also participated in the launch of a new cloud-based business management solution called Wiise, alongside Commonwealth Bank of Australia and Microsoft.