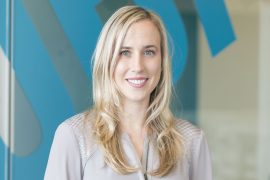 The latest example is a new fintech accelerator in Boston led by MassChallenge, a non-profit organisation that runs a global network of start-up support programmes that don’t take equity stakes in the companies.

MassChallenge Fintech will match early-stage ventures with well-established industry partners to work together for six months on a project, such as co-developing a product or service. Rather than the start-ups pitching their ideas, the larger organisations present “challenges” they’re having with their businesses, and the programme seeks start-ups that might be able to help.

The idea is that corporations can tap emerging technologies, ideas, and talent at younger, often faster-moving companies. Meanwhile, the start-ups get access to corporations’ expertise and potentially gain an inside track to business deals, such as customer agreements, investments, or acquisitions.

The programme’s first session is slated to begin in January, and the plan is to select up to 30 start-ups to work with around 15 partner organisations, says Devon Sherman, the programme’s director.

“There’s really been an evolution in how corporations are thinking about partnerships,” Sherman tells Xconomy. “Eight to ten years ago, they were struggling with how to view fintech start-ups. Were they competitors? Were they collaborators?”

Sherman studied anthropology and economics at Harvard University, so Xconomy was curious what insights she has gathered, from an anthropologist’s perspective, about entrepreneurs.

At State Street, “I played a liaison role between fintech startups and this big, behemoth organisation”, she says. “It was really interesting to see the huge differences in culture and how valuable it can be, from a cultural perspective, to bring those two entities together.”

Biller shares an example of how evolving consumer attitudes are changing the way financial services firms operate – and increasing the need for better technology, she says. Younger generations increasingly care not only about saving for a comfortable retirement, but also making sure their retirement funds are invested in companies that “have a high degree of sensitivity” to their values, such as environmental impact, Biller says.

Fiduciaries are now “managing those outcomes as well as investing for a financial return”, she notes. “This is completely new to asset management.”

Balancing those two demands can be challenging, in part because it requires developing better tools for collecting, structuring, and analysing the relevant data in a transparent way, she says. That’s where start-ups might be able to help, she adds.