Finserv not ready for blockchain yet, McKinsey says

In spite of all the hype and capital invested into blockchain projects, the financial services industry is still far from its fully realised dream of running networks and systems on blockchain tech, according to the latest McKinsey report.

According to the chart below, financial services have the largest amount of money to spend on blockchain, but the feasibility of these project is, in every single use case, limited. 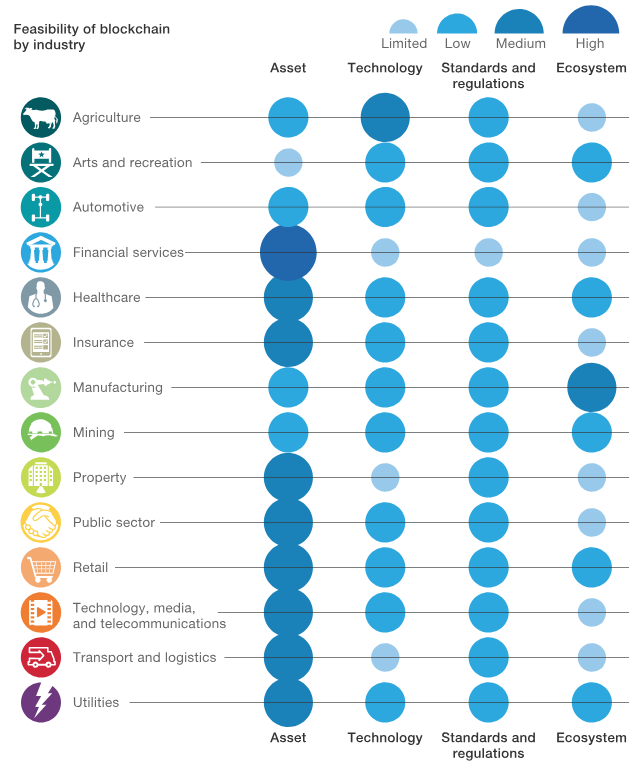 The report argues that standards and regulation need to be homogeneous across the board to be effective. It praises consortiums like R3 and the effort they have put into blockchain regulation, as well as some government bodies and their agreeable position on the topic.

“Standards can be established with relative ease if there is a single dominant player or a government agency that can mandate the legal standing,” it reads.

Another reason why blockchain is held back is its technological immaturity, which means many of the design choices can be selected according to the most commercially viable model, but not the most efficient. Plus, switching costs are still disproportionate.

“[Technical] trade-offs mean blockchain performance might be suboptimal to traditional databases at this stage, but the constraints are diminishing as the technology rapidly develops,” the report adds.

Lastly, the report also mentions the ecosystem. This refers to tracking and transacting assets digitally. The key factor here is the digitisation potential of physical assets, which, unlike digital assets like equities, can’t be stored and transacted on the blockchain without integration of internet of things (IoT) or biometrics.

The report doesn’t deny the potential for this tech, though: “Major current pain points, particularly in cross-border payments and trade finance, can be solved by blockchain-based solutions, which reduce the number of necessary intermediaries and are geographically agnostic. Further savings can be realised in capital markets post-trade settlement and in regulatory reporting.”

It’s important to note that the report acknowledges the advances that have been taking place in these three areas, and it estimates a brighter picture in three to five years.