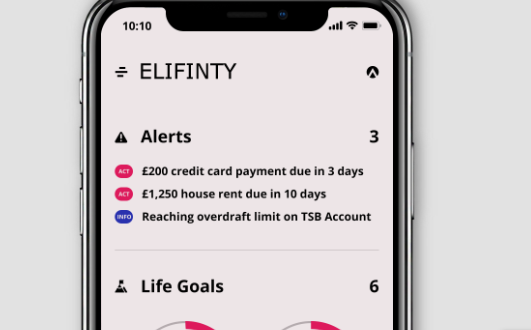 “Connect with the right people who specialise in solving your problems”

UK-based personal finance app Elifinty is readying for launch with the offer of improving financial well-being and rebuilding credit.

Elifinty was founded by Maysam Rizvi (CEO), a former banker who worked at JP Morgan and United Overseas Bank (UOB).

On its website, the start-up is looking for people to sign up to its services. There is no indication as to when it will launch or any plans for beta testing.

It is in the very early stages but says it helps users “connect with the right people who specialise in solving your problems”.

For example, the free app will offer alerts such as a credit card payment is due in three days or the user is reaching their bank’s overdraft limit.

Users can get help if declined a credit application; and via open banking, people can link all their accounts in one place.

It is also looking to partner with banks and charities.

For the first group, it aims to “reduce losses from difficult or defaulted accounts” and via APIs, connect to the bank’s mobile app.

Like many start-ups, Elifinty’s website looks trendy but is vague on details. However, it will be in batch nine of the Czech Republic-based acceleration programme StartupYard on 13 June. The latter says it has helped 58 companies since 2011.

Elifinty’s advisory board comprises people with plenty of experience of financial inclusion.