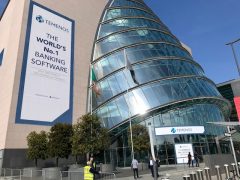 Banking tech vendor Temenos held its annual gathering, Temenos Community Forum (TCF), last week in Dublin – its biggest one yet, with nearly 1,500 people from over 100 countries in attendance. The event is open to Temenos’ customers, partners, analysts and press, and prospect clients.

David Arnott, CEO of Temenos, emphasised the openness and the community aspect of TCF as key contributors to the event’s success and growth year on year.

He added that in 2018, the number of prospect customers attending TCF trebled compared to 2017. 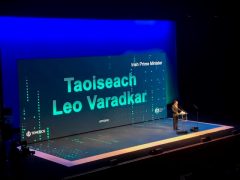 Meanwhile, 85 new banks were added as customers in last year, with the total number of Temenos clients now having surpassed 3,000.

The keynote was delivered by Ireland’s prime-minister Leo Varadkar, who stressed the country’s commitment to the European Union, free trade and securing a position of “a leader, not follower” among tech hubs worldwide.

He emphasised the importance of education (“key to transformation”), digitalisation (which the government fully supports and “leads by example”, he said) and making sure the innovations benefit the people of Ireland (raising living standards, provisioning good jobs, providing a work-life balance, improving the infrastructure, investing and healthcare and education etc). 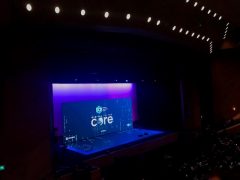 The theme of TCF was “digital to the core” (clever pun!), and whilst Temenos is known for its T24 core banking system, Arnott feels that the company has now moved beyond the core and is ramping up its capabilities in payments, front office and anti-money laundering (AML).

“In software, whoever is the biggest – wins,” Arnott stated in his opening speech. Temenos has been outperforming its competitors in the number of sales of its flagship core banking system, T24, steadily over the last few years; and it is also diversifying its portfolio via acquisitions.

Not all M&A endeavours have gone to plan, with ION Trading outbidding Temenos for trading tech vendor Fidessa, and the U-turn on selling T24 to Trinovus clients in the US. But others have been a success, e.g. Odyssey Financial Technologies now firmly in Temenos’ WealthSuite family, the Edge IPK creating a foundation for Temenos’ front office suite (see below), and Akcelerant’s lifecycle management solution going strong. 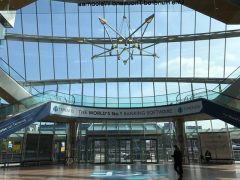 Software modernisation – front-to-back office – is “the future”, Arnott told the bankers at the conference.

“The fundamentals of banking remain unchanged,” Arnott commented in his opening speech.

“Technology on its own can help, but it can take you only so far,” he continued. “On its own, it won’t change the industry.” 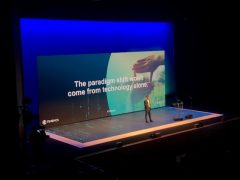 Change must engulf two more areas in addition to technology: cultural change and business model change. These are “prerequisite” for success going forward.

“Banks can be better platforms but they also must become challengers themselves,” he suggested. He cited Openbank, Santander’s digital banking subsidiary in Spain, as an example (which is a T24 user).

The vendor has also launched Temenos Learning Community (TLC), a digital platform based on the e-learning and change management offering from India-based provider Gieom. The Gieom solution is white-labelled by Temenos. 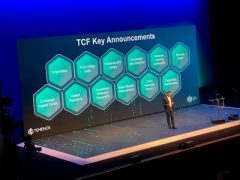 At TCF 2018, Temenos unveiled its new front office suite, which in the company’s words, “unleashes the full potential of digital services for banking customers across the retail, corporate and wealth segments”.

It is a comprehensive, open, omnichannel, data-driven solution, which combines Temenos’ existing solutions for channels, analytics, risk and compliance. There are brand new components, too, such as an API layer, artificial intelligence (AI) models for customer engagement, and consent management.

Temenos Front Office Suite can be deployed onsite or on a hosted basis.

According the vendor, around 300 banks already run various its front office solutions – Banque Raiffeisen, Metro Bank, MyState and KBC among them. The overwhelming majority of these are also T24 users. And whilst the new suite runs on the same technology platform as the T24 core, it is back office agnostic. 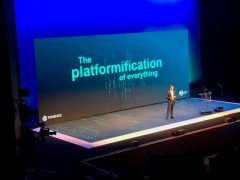 “Our platform offers genuinely omnichannel engagement, including sales (eg. Salesforce), advice (personal finance management, PFM), influencing behaviour via gamification, and so on – and all this is centralised,” stated Mistry.

After core, front office is the second largest investment for the vendor, he told FinTech Futures.

Mistry echoed Temenos CEO words that banks can become truly digital only when they transform their operations front-to-back office, but “many banks want deeper customer intimacy as an immediate benefit”, he noted. “Temenos Front Office Suite will help us address the needs of these banks – we estimate a total market potential of $3.2 billion for banking channels and front-office third party software globally.” 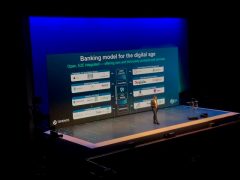 Temenos Origination – a new component-based platform – was another big announcement at the TCF event.

According to the vendor, it “enables banks to onboard customers and originate products across all segments, channels and devices, offering bank customers a frictionless and contextualised digital experience”.

Personalised products and digital services can now be “rapidly designed” and “at a fraction of the cost of traditional solutions”.

By Temenos’ estimations, banks currently spend approximately $10 billion on in-house or legacy origination systems “that are costly to build and maintain, are hard to upgrade, driving up costs”. Temenos Origination, it states, “dramatically reduces these costs by eliminating redundant processes and data”.

Temenos Origination is integrated with Temenos’ T24 core banking system and is available on Temenos Front Office Suite (see above). It can also be used with any other core banking solution provided by a third party.

F stands for “fun” in TCF

The new offering “represents a new approach to the origination and onboarding challenge in the digital age”, said Adrian Hadley, core banking product director at Temenos.

It is “structured around customer needs rather than the bank’s products”, he explained, and thus “provides a componentised and flexible solution for building and maintaining compelling customer origination and onboarding journeys”.

The solution will be available via a set of pre-configured regional or country models that will cater to local practices, regulatory requirements and interfaces, while still being supported by a common code base.