UK-based blockchain company Zonafide says it has shut down today (10 May) due to ICO costs and the unexpected freeze of a major deal.

On Twitter, the firm says: “A major engagement we had expected was put on hold. With the ICO costs the company became insolvent and our personal resources were expired. Very sad.” 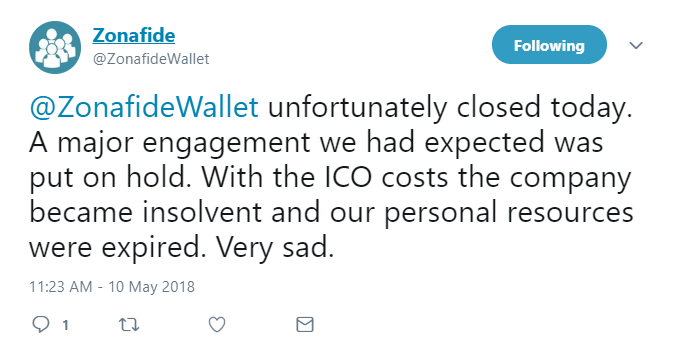 FinTech Futures contacted Zonafide to see if this was a reference to the Atos deal. It replied: “Yes, we had an engagement with a client that used Atos for BPO. That client has delayed the project and we cannot afford to wait.”

As reported in February, European IT services company Atos turned to Zonafide to help combat identity theft and cybercrime.

The deal would have seen Atos assist their clients in the use of Zonafide’s blockchain-based technology in “processing life events such as marriage and deaths”. Atos’ clients span a lot of industries and sectors, including £3 billion of UK Government contracts.

At that time, Zonafide said its mobile app helps prevent fraud and cybercrime by securing activities – such as payments or updating personal details with a bank.

Ivo Luijendijk, group industry director data analytics, IOT and blockchain at Atos, said in February: “Discussions with Zonafide have been greatly appreciated by our clients and we have already identified a prospect. I think this will be a fruitful partnership for both Atos and Zonafide.”

At the time of writing, there is no official announcement on Zonafide’s website.

Zonafide was founded in 2014. Paul Worrall, its founder, is also the founder of Interition, a firm that applies semantic web technology to the management of enterprise software and its deployment environment.