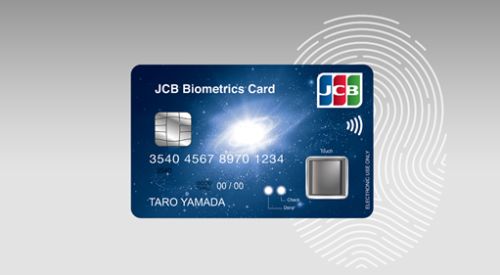 Hands up who’s interested in this? Japan’s JCB will conduct a pilot trial of its latest biometrics card with fingerprint authentication.

JCB’s contactless payment solution is provided by Idemia, an augmented identity provider, and previously known as OT-Morpho. Toppan Printing will also take part in the trial in respect of card personalisation.

Users first record one or more fingerprints for authentication purposes. When they want to buy something, they touch the sensor on the card’s lower right corner with their finger to authenticate payment.

The record is only kept in the card, and given that authentication is also done on the card, the firms say that merchants “do not need any further equipment to accept payment”.

The duo say while most contact chip cards rely on users entering a PIN number for authentication, its version will remove that.

The pilot first involves issuing the JCB biometric card to its employees from this month.

There are no specifics or timelines, but JCB says it will continue to explore and develop various authentication solutions.

OT (Oberthur Technologies) and Safran Identity & Security (Morpho) joined forces to form Idemia. The firm says it has close to $3 billion in revenues, 14,000 employees around the world, and has clients in 180 countries.

Back in January, JCB unveiled trial plans for a multipurpose palm authentication system in collaboration with Universal Robot (UR) and the National Institute of Advanced Industrial Science and Technology (AIST).