European Payments Summit 2018: the future is nearer than you think 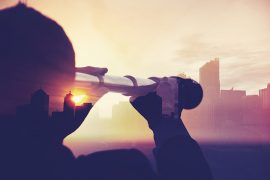 One of the interesting aspects of the European Payments Summit (EPS), which was held in the Netherlands in mid-March, is its willingness to present on subjects that seem incredibly futuristic. But as delegates at this year’s event found, that future is much closer than they might have thought.

The conference chairman, Harry Smorenberg, is a technology and payments enthusiast, and that is reflected in the conference programme. Rather than creating an event as solely a money-making enterprise, EPS has the feel of one that’s been put together by people who are interested in, and understand, the payments business as well as where technology might take that business.

George Gesek, founder and chief executive of Vienna-based Novarion Systems, told delegates that a universal quantum computer is about two years away from completion. In about four years, the world will have its first products based on quantum computing. The details of what quantum computing is are mind blowing enough; Gesek’s time line really had delegates thinking.

In financial services, quantum computing has significant implications for existing security measures. Current encryption methods, which are based on prime factorisation, are difficult to crack. For example, Gesek showed that it would take many trillions of years of computing time to crack RSA encryption algos on a Turing machine (Gesek used the term “Turing machine” to differentiate from quantum computers, which are very different beasts). Quantum computers are dramatically faster; within 70 microseconds, a quantum computer can decrypt any encrypted message. “This means all internet security is gone,” he said. “This could happen in five years.”

Quantum computing is something that any organisation which relies on data security (as in any transactional system) should view as a “big thing” with which to deal.

A bit like the Hindu god Shiva, quantum computing will destroy current encryption methods (technically not “evil”, if you know your Hindu gods) but will also transform them. Firms can use quantum technology to make transactions secure in the future, said Gesek. This can be done without ditching current technology; Turing computers can run quantum algos to withstand attacks perpetrated by quantum computers.

This could take the form of a quantum secured blockchain. In June last year, MIT Review reported that Evgeny Kiktenko and colleagues at the Russian Quantum Centre in Moscow designed, built and tested a quantum blockchain system in which the security is guaranteed by quantum mechanics. It was built using a standard quantum cryptography system of the kind that is already commercially available. It uses a quantum identification system in which each party can verify the identity of any other in a way that is guaranteed by the laws of physics. This quantum signature is attached to every transaction, making it impossible to tamper with.

The MIT Review echoed Gesek’s warning to EPS delegates: “The threat from quantum computers is certainly real – and not just for blockchain technology. Any information that is currently stored using conventional cryptography will become unsecure as soon as the first powerful-enough quantum computer is switched on.”

Gesek predicted that the first quantum secure algos for Turing computers would be available in software code by 2019. “Banks have time within the next two years to get this technology and then another two years to implement it. This is a possible time frame for any organisation.”

Banks should initiate post-quantum security assessments and figure out which systems will be affected by quantum technology, he said. “Do this now, because it will take some time. Once you have quantum secure ICT, follow developments over time because the technology will develop and you will need to scale your defence on Turing machines.”

Another presentation at EPS that set brain cells whirring was that from Vivek Bajaj, vice-president of IBM’s Watson Financial Services. He reminded delegates that any technology – no matter how leading edge – requires context if it is to be of value.

“Artificial intelligence (AI) in itself is of no value; it is about the application of technology to solve specific business problems,” he said. “You don’t have an ‘AI product’, you have a business product that uses AI…”

This is an excerpt. The full article is available in the April 2018 issue of the Banking Technology magazine. Click here to read the digital edition – it is free!

The challenges of cloud native and multi-cloud API management