Appian World 2018: blockchain and the art of anticipation 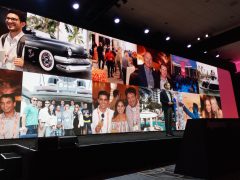 If you have a blockchain problem… if no one else can help… and if you can find them… maybe you can hire… the Appian team.

Not a word-for-word quote from Appian, a US-based provider of low-code applications, but at its global user conference the firm made it very clear that it sees a strong demand for distributed ledger technology (DLT) – and it wants a juicy piece of the action.

Appian World 2018 is held at the fancy Fontainebleau Hotel in Miami. It’s spread over three days (23-25 April) and with around 1,500 attendees.

Let’s be clear, Appian doesn’t operate in one arena. Financial services tech is around 30% of its business. It also offers services in life sciences, healthcare, the public sector, and more.

The first two days gave me a chance to interview its team, learn in labs, and hear more about its drag-and-drop approach to software. The company also revealed its expanded artificial intelligence (AI) alliance with KPMG; and the unveiling of its cloud-driven intelligent contact centre platform.

On the final day (25 April), there was plenty of talk about blockchain and an opportunity to hear about Appian’s work with banks.

At its “Developer Jam” sessions, Appian unleashed its technical teams to big up blockchain – and give a handy overview of what’s out there.

Make no mistake, the firm sees a “high demand” for the technology as its offers disintermediation and trust through cryptography. It says blockchain acts as an inexpensive “third party escrow”. In comparison, PayPal and Ebay are examples of companies taking a “healthy cut” via what they offer.

Appian’s team explained that on Gartner’s research portal in 2017, blockchain was “the most searched term”.

Naturally, Appian wants to profit from this interest. It says it can offer help building blockchain apps – such as by using SAIL. The latter is not a reference to the programming language, but Appian’s “Self-Assembling Interface Layer” that provides web and native-mobile user interfaces through a “write once, deploy everywhere” architecture.

After Bitcoin and Ethereum, Appian sees Ripple as the “third most popular” blockchain technology. The firm says Ripple is “an excellent example of an industry having a need – beyond what Bitcoin and Ethereum offer”. Ripple introduced issuances, which have been used by banks to trade currencies at “lower fees”.

The blockchain framework Hyperledger Fabric also got some love, which Appian believes will be the “most popular”.

In addition, it briefly discussed Hyperledger Sawtooth – used by Amazon and Huawei – and “ideal” for low-power internet of things (IoT) apps; Hyperledger Indy – which provides digital identity capabilities to users (and “when data is no longer used it is expunged”); and Hyperledger Iroha – which has a “mobile development focus”.

The bottom line here is that Appian wants to show it understands the market, and is pushing its belief that it can cater for the demand for blockchain.

How the West was won

As exclusively reported by FinTech Futures last year, Bank of the West, a large regional bank in the US and a subsidiary of BNP Paribas, was embarking on a major tech overhaul with Infosys (it is believed).

Appian is involved and helping with customer onboarding and compliance for the bank. Clearly, both parties need more people for the project as there are a lot of job ads on the internet for developers, managers etc.

At a “fireside chat”, Martin Resch, the bank’s EVP, discussed its revamp and where banking sits in terms of innovation.

He was fairly open and said people would be “hard pressed to find an industry behind us”. He sees the insurtech sector as being “miles ahead”. So well done you.

There wasn’t a great deal of specifics, but he said Appian has “created an industry that didn’t really exist before”. Just as a reminder, Appian was founded in 1999.

It will be good to hear more about how their joint project develops in the future. I did ask Appian which core banking system they integrate with at Bank of the West, but they couldn’t confirm the name.

Appian doesn’t just deal with US banks. At the show was Switzerland’s Vontobel Bank, which in 2017 turned to the company to “execute its digital transformation strategy across all business divisions”.

At that time, the bank said the platform is being used by 1,000 of its 1,700 employees, across the company’s European and North American offices, supporting the bank’s three main business areas: asset management, private and investment banking. (Vontobel uses Avaloq’s core banking system, which Appian will integrate with.)

Hanspeter Purtschert, Vontobel’s head of integration services, told us that it has around 550 users of the platform. That appeared to contradict last year’s information. However, he praised Appian as the bank has standardised its workflow and reduced time and costs by 72%.

Along with the Swiss bank, was Bendigo and Adelaide Bank from Australia. The latter explained how it’s got a very complex legacy system in place. This includes four core banking systems and 27 investment management systems.

In total, and according to Petrina Ryan, Bendigo’s process strategy and methods lead, there are nearly 300 systems across the bank.

Like many fintech firms, this is where Appian can step in and help. It believes its software can be the nifty integration as banks (across the world) seek to work out the unholy mess of their legacy systems.

Near the end of the day, I had a (very) brief chat with Mike Heffner, who leads Appian’s global financial services practice.

In his view, governance, risk management and compliance (GRC) is “hot” and he made it clear it’s pushing for expansion in Europe. Last year, Appian revealed some major appointments – Paul Maguire, VP of Europe; Stephane Antona, VP of marketing; and Charlie Thompson, UK regional VP.

Also in 2017, and as one example, the UK insurer deployed Appian’s platform for its digital revamp. Appian said it created more than ten applications for automating processes.

As with the technical team and DLT mentioned above, Heffner said: “We’re ready for blockchain.”

It was a short chat as Heffner was a man in a hurry. He wanted to go and hear the final speech from the famous and jovial Steve Wozniak. Who can blame him? It was great to hear Apple’s co-founder talk about Steve Jobs, the company’s history and more. The audience loved it.

During the event, I did ask Appian about interviewing the CEO, Matt Calkins, but that didn’t happen. That’s disappointing as I’ve come a long way and his views on how the firm is going to succeed in the highly competitive fintech arena, would have been interesting.

Next year’s conference will be in San Diego. In-between then, and for those deals which aren’t off the record, it will be good to hear what else Appian gets up to in our fintech world.