Global investment in the insurtech industry surged in 2017, with Europe emerging as a new insurtech hub outside the US, according to new research from Accenture.

The research, which includes new analysis of CB Insights data on insurtech deals over the last year, appears in a new report titled “Fearless Innovation: Insurtech as the Catalyst for Change Within Insurance”.

According to the report, the number of insurtech deals increased 39% globally in 2017, with the total value of deals up 32%, to $2.3 billion.

Asia-Pacific saw a significant increase in funding, with a 169% rise in deal values, to $358 million, with the number of deals rising 27%. 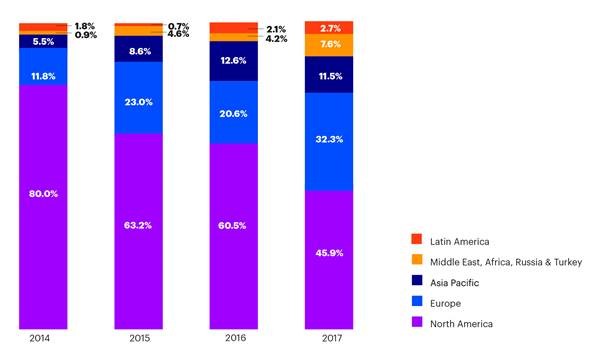 Number of insurtech deals by region

Despite the uncertainty around the UK’s vote to leave the European Union, the nation continues its emergence as Europe’s insurtech capital, with 41 deals in 2017, representing total growth of 117% over the last two years. Deal values vastly increased in 2017, with $364 million invested in UK-based insurtechs, up from $19 million the year before.

Roy Jubraj, Accenture’s UK and Ireland insurance strategy and innovation lead, says: “Insurers must recognise that insurtech investments alone can’t deliver the levels of change and innovation the industry requires or that its customers expect. The key is having an enterprise-wide innovation strategy that transforms the core business and enables the company to drive growth.”

The research reveals that property and casualty was the most popular insurance segment for insurtech investments in 2017, accounting for 42% of global investments, with multiline (26%) and health (18%) rounding out the top three.

Personal lines accounted for 68% of insurtech investments, with commercial lines and mixed applications accounting for 26% and 6%, respectively.

From a value chain perspective, marketing and distribution led all areas in terms of insurtech investment, accounting for 53% of deals globally.

Accenture says this is evident in the number of start-ups pitching “slick, app-based sales and distribution experiences”, as well as those improving customer claims through mobile photo-evidencing or chatbot first notification of loss.

The most common areas for these investments were health and digital health (14% of such investments), the internet of things (13%), and big data and analytics (9%).

Michael Costonis, who leads Accenture’s insurance practice globally, says: “The next step for insurers is to use insurtech as a springboard to innovate across their entire organisation. After all, $2.3 billion is a small slice of the pie when you consider that insurance is a $4.2 trillion industry.”