BB&T operates over 2,100 financial centres in 15 states and Washington DC. At 10.46 pm (UK time) yesterday (22 February), the bank reported many of its services were unavailable, including digital banking, Phone24, and ATMs.

The bank says: “We’ve identified this as a technical issue within our systems.” 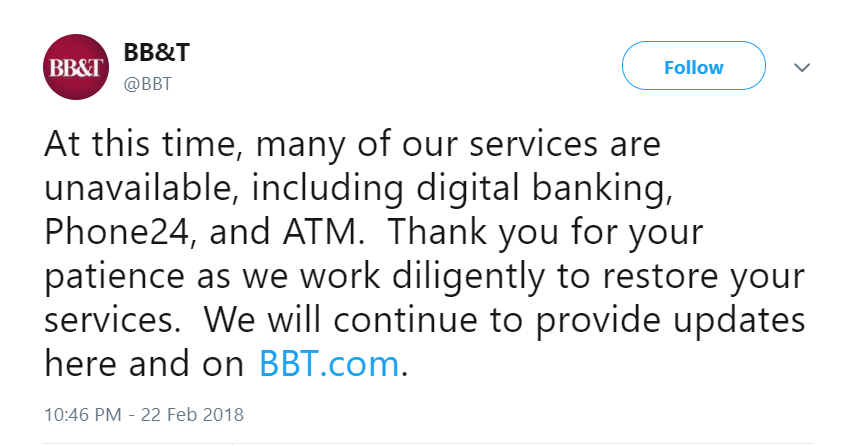 As usual on Twitter, the responses from customers were unsympathetic. They ranged from “About to lose a long time customer. Need a fix or an update immediately” to “The FB [Facebook] page has several people saying their cards were declined, and all of the BBT responses are all the same vague canned response. This is not comforting at all. I’ll be closing my account”.

At 11.21 am (UK time) today (23 February), the bank was still having problems. A message on Twitter explained: “Thank you so much for your patience and we will continue to provide updates here and on our website. At this time, we have no reason to believe this issue is related to cybersecurity.”

BB&T has a number of legacy solutions across its technology stack, including IBM’s FTM for payments and FIS’s ACBS for lending.

In 2016, it embarked on a core software transformation venture with SAP. As exclusively reported by FinTech Futures, the bank opted for a gradual renovation approach of its core banking software, with SAP’s offering, SAP for Banking (namely its Loans Management component), to be implemented to support BB&T’s retail lending operations. So far, no updates on the project and its progress have been announced.

Last month, and with much better news, BB&T revealed it will set aside up to $50 million to invest in and/or acquire emerging digital technology companies as it pushes further into the fintech fray. BB&T chairman and CEO Kelly S. King says this investment “represents an important strategic milestone in our digital business transformation”.