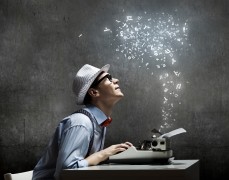 Not an actual image of Antony Peyton

Despite not being asked and no one being interested, a fintech journalist has decided to share his predictions for the year ahead.

Antony Peyton, Banking Technology’s deputy editor – aka “the ancient one”, took time out of his busy schedule of complaining about London’s transport network to compile a list that contains more fatuous futuristic nonsense than a science fiction novel by L. Ron Hubbard.

If you’re still here, the catastrophic catalogue of conjectures is as follows:

1. Blockchain pushes further into the mainstream.
It becomes so ubiquitous cyclists ride blockchain-powered bicycles whilst listening to music created by blockchain-fuelled algorithms. On radio stations, cerebrally-challenged DJs will play remixed tracks such as “Blockchain Rockin’ Beats” by the Chemical Brothers while screaming “ledger-end!” in an unsubtle play on the word “legend”.

2. The price of Bitcoin soars past $50,000.
The fintech world will explode in excitement (or rage for some). Some early investors get so rich they can afford to build a Death Star. In addition, the number of “Bitcoin is a bubble” stories simply gets out of hand. Ironically, the only bubble bursting pertains to these news reports on bubbles.

3. The rivalry between Swift and Ripple escalates to a new level.
Journalists will look on in mock shock (secretly delighted in reality) as well-dressed business people tool up and confront each other in a car park. Both parties exchange words – such as “You want some?” and “You shoot me in a dream, you better wake up and apologise”. And other lines which may or may not have come from the movies.

4. The payments space is further enveloped by gimmicks as companies attempt to stand out.
One firm will unleash a “Pay and Toe” app. This is to encourage health conscious payments via martial arts and is targeted at millennials (naturally). A user needs to pay with the sole of his/her foot – which entails adopting a Jeet Kune Do stance comprising a foot pointed high in the air that only the late Bruce Lee would have truly attained. Lazy people will probably just place the phone on the floor and hover their foot over it.

5. In a bid to make fintech conferences more exciting (good luck with that), organisers decide to employ ridiculously hyperactive presenters.
At one event, attendees will be bemused to see an individual cartwheel onto the stage while carrying two flags emblazoned with the words “Woo!” and “Yeah!”. To get the audience pumped up, he then runs up and down the stage shouting “Developers! Developers! Developers!” for five minutes. Rather like ex-Microsoft CEO Steve Ballmer but minus the copious amount of sweat.

6. Staying with the wonderful world of conferences, 2018 will see diversity make more advances.
More women will be invited to panels and to speak – and men will no longer mansplain.

LOL at the last one. Like men are going to stop mansplaining.