Are Amazon and Salesforce ditching Oracle? 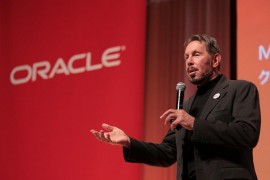 Mom always told us if you say mean things about the other children, they won’t want to play with you, reminds Enterprise Cloud News (Banking Technology‘s sister publication). Larry Ellison, Oracle’s feisty founder, is learning that lesson, if a report on The Information is true.

Oracle trash-talked both Amazon and Salesforce last year – particularly Amazon – and now both companies are looking to cut their extensive investment in Oracle databases, according to a report on The Information, attributed to anonymous company insiders.

Ellison singled out Amazon in particular for verbal abuse last year, but Salesforce got its share. In an earnings call last month, Ellison said, “Amazon continues to buy Oracle technology to run its business”, spending $50 million during the quarter. And Salesforce “runs entirely on Oracle”, he said.

“But Ellison’s comments about Amazon and Salesforce don’t tell the whole story,” notes The Information. “In reality, both companies are actively working to replace Oracle software running on critical business systems with open-source database software alternatives, and have made significant progress toward getting off Oracle entirely, according to people familiar with the matter.”

Amazon began exploring Oracle alternatives in the early 2000s. Its retail unit has switched two internal databases that power its e-commerce business from Oracle to NoSQL, according to The Information‘s article.

Salesforce has been developing an Oracle database replacement, with the delicious code-name “Sayonara” (which is Japanese for “goodbye”) and is ready to deploy it internally. Salesforce expects to be completely off Oracle in 2023, the article says.

Oracle declined to comment, and Amazon did not respond to a query from Enterprise Cloud News.

As for Salesforce: “We don’t comment on rumors,” a spokesperson said in email. “But I can tell you that Salesforce is focused on delivering the most trusted, reliable and resilient infrastructure available and we do that with a multi-vendor approach.”

Amazon and Salesforce may be motivated by cost, as Oracle is very expensive, and Oracle aggressively enforces licensing, which is confusing and easy to violate, The Information notes.

Another article in Between the Lines presents an alternate theory: that the two companies are tied to Oracle; they just want Ellison to shut up about it.

On the other hand: Amazon is stepping up its database service offerings to compete with Oracle, while Salesforce and Oracle compete on applications. Does it makes sense for two companies to rely on a competitor for vital infrastructure?