The internet of things (IoT) is fast becoming a trillion-dollar industry. A recent report from IDC shows spending on IoT could reach $772.5 billion by the end of 2018, with the whole market headed toward $1 trillion by 2020.

Enterprise Cloud News (Banking Technology’s sister publication) reports that spending on IoT hardware, software, security and services is expected to increase by over 14% between 2017 and the end of 2018. By the end of this year, the market is expected to reach $674 billion before climbing to $772.5 billion by the end of next year.

Over the next four years, IoT spending is expected to increase by a compound annual growth rate (CAGR) of 14.4%. This means that by 2020, the market should hit the $1 trillion market and then increase to $1.1 trillion by 2021, according to IDC.

Spending on hardware, including sensors, modules, infrastructure and connected devices, is expected to be the biggest category, with $239 billion expected to be spent in 2018. However, IDC is predicting that IoT-related software will grow faster than any other category – at a CAGR of 16%. 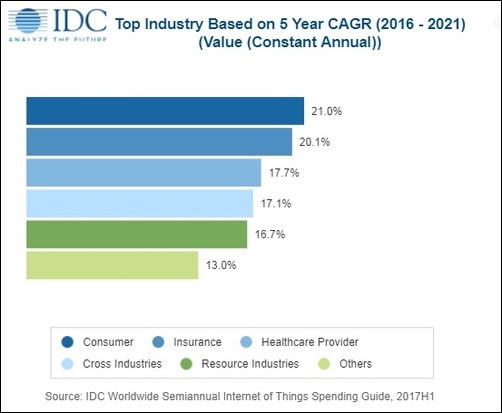 “Software creates the foundation upon which IoT applications and use cases can be realized,” Carrie MacGillivray, an IDC analyst, says. “However, it is the services that help bring all the technology elements together to create a comprehensive solution that will benefit organisations and help them achieve a quicker time to value.”

It’s this large increase in IoT spending across the board that has the industry looking to invest.

In October, Dell announced that it would start to leverage all the various components of its business, including Dell EMC, VMware, Secureworks, RSA, Boomi and Virtustream, into a new offering that Michael Dell called the “distributed core”. The idea here is that IoT is forcing companies to create edge networks to process the data, but businesses also need the cloud and other data center equipment to store and further analyse IoT data to produce long-term results.

The three biggest industries that will spend the most on IoT in 2018 are manufacturing ($189 billion), transportation ($85 billion) and utilities ($73 billion). IDC also predicts that cross-industry spending, which includes a range of markets such as connected cars and smart building, will represent about $92 billion in spending.

IoT-related consumer spending is expected to reach $62 billion by the end of next year.

China is expected to spend more than any other country on IoT. By the end of 2018, China will have spent some $209 billion on various IoT equipment and projects, with the US spending $194 billion. Japan and South Korea are also expected to be leading IoT spenders next year.