What a Swell Sibos we had 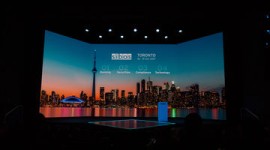 One of the more entertaining aspects of this year’s Sibos in Toronto was the continuation of the rivalry between the event’s host, Swift, and distributed ledger technology (DLT) firm Ripple, writes Heather McKenzie, editor of Daily News at Sibos (Banking Technology‘s sister publication).

Subtlety doesn’t seem to be Ripple’s forte – black limousines and people carriers, emblazoned with the company’s corporate logo, lined up outside the Metro Toronto Convention Centre to ferry select Sibos delegates to Ripple’s own event, Swell, nearby.

Swell was staged because the company’s customers “requested that Ripple bring together leaders in banking and blockchain who are committed to changing the way the world moves money today”, according to the company. Among the speakers was the former chairman of the US Federal Reserve System, Ben Bernanke, and British technologist and putative inventor of the world wide web, Sir Tim Berners Lee.

Seemingly it was all love and harmony, with Toronto big enough to host two fintech events. Indeed, Ripple was an exhibitor at Sibos.

In a small dig, a Swift spokesperson said that Sir Tim was speaking at Sibos before he headed down to Swell. Ripple gave as good as it got, with a spokesperson pointing out that Ripple had “sponsored Sibos” for the past two years (possibly referring to the company’s presence as an exhibitor). The spokesperson said Ripple members wanted to hear “pointed industry commentary” on the future implications of blockchain and digital assets. There was a fair amount of discussion about blockchain and digital assets at Sibos, but I suppose it wasn’t pointed.

After the event, Ripple claimed Swell was “far from a typical banking event”. It had an “inviting atmosphere” that put visitors at ease and enabled them to speak candidly about “pain points” associated with cross-border payments.

I have been to 25 Siboses and I’ve never thought anyone looked particularly ill at ease – except maybe after a hard night out on the tiles. Many clichés are bandied about at Sibos but there’s also plenty of candid talk and pain points get an airing, too.

Ripple says the main conclusions of its event are that banks want and need to improve the retail and corporate customer experience, losing market share to other payment providers is a concern, and they need a line of sight into the future of blockchain. Well, Ripple would say that, wouldn’t they?

One of the main pain points that came up repeatedly during Swell was the inability to track the status of a payment, according to Ripple. This may have been a compelling case for Ripple two years ago, but Swift’s global payments innovation (gpi) solution offers a cloud-based tracking facility…

This is an excerpt. The full article is featured in the November 2017 issue of the Banking Technology magazine. Click here to read the digital edition – it is free!