Bankers and retailers – will we see roles switch? Or simply morph into a single discipline? 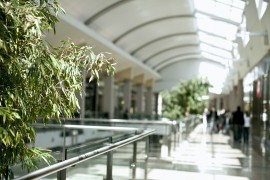 In recent updates on movement by shopping mall operators like Westfield and the like to drop all references to the term Mall, preferring instead to call their sprawling premises village squares, town centres and even “cities” – anything it seems to avoid becoming ghost towns, as CNBC commentator and blogger Jim Cramer rather dramatically predicted earlier this year.

Technology is having a tremendous impact on the way communities shop, so changes are more or less expected as we see these shopping mall operators push back on so many dire predictions being made about them. But can they change and yes, could these changes lead to a greater overlap with banking as it exists today? Do we even need differentiation between the two and yes, will they both be able to keep us satisfied when it comes to access to our cash?

“Our properties are not just about retail or shopping – they serve as gathering places for their respective communities,” said CBL Properties CEO Stephen Lebovitz in prepared remarks. “They are evolving through the addition of more food, entertainment, service, fitness and other new uses and we are actively exploring adding hotels, medical, office, residential and education components,” he added. While there was no reference to banks per se, we are already seeing retailers offering more and more services that used to be only provided by banks – we have been able to get cash when using our debit cards at retail stores, for instance, and oftentimes with less costs than otherwise levied by banks in terms of out-of-network access – but could banks in turn begin providing goods complete with free shipping?

How many of us were aware, for instance, that in former eastern-bloc countries, under communism, you had to go to your bank to purchase more upmarket goods like jeans, lingerie and even soap and perfume? I just happen to know about this as my wife, Margo, grew up in Warsaw, Poland under communist rules and got a few outfits in PKO. But as extreme as that sounds (and at odds with what we may have thought about retail experiences in the dark days of Soviet rule), the inroads being made by online merchants like Amazon and the many online home stores that are quickly circumscribing traditional financial services models (think Amazon Prime) suggest that in all likelihood, our favorite bank may soon be shipping us toasters and hair curlers. They used to do this to attract new customers so could such a situation happen once again?

All of this is simply a way to say that no industry is safe from incursion by industries in adjacent markets. And you should be able to get your cash from a retailer and if your bank wants to ship you a phone then they should be able to without having anyone raise an eyebrow. Throw into this mix another adjacent market, telecoms and, as we saw when AT&T Introduced the Universal Card in the ‘90s, we witnessed one of the most disruptive product initiative in living memory.

So, where are we headed you may ask. Certainly, there are continual references to convergence and disruption not forgetting innovation but where it leads us back to is the customer, the customer experience and yes, “keeping the customer satisfied”! Main Street and High Street may continue as transportation hubs given the inflexible nature of major infrastructures, but when it comes to banking, that is no longer where society in need of financial services are to be found. Here in the US, Main Street is more often than not just a dusty, unkempt, byway populated with fading billboards and malfunctioning traffic lights!

If banks do want to keep their customers satisfied – and no, not from serving up illegal moonshine but rather, a raft of more legal financial services then they have to reorient themselves and follow the crowd. It may not be to the Mall, but as retailers wrestle with repurposing traditional malls, perhaps the integration of branch banking with new-age Town Centres and Village Squares.

With the transition from purely fashion malls to multifunction gathering places with gyms, movie theaters, hotels and churches – even car showrooms – why not bank branches? If my local Safeway can be home to a Wells Fargo branch office, why not the Town Centre? Of course, this is convergence that is on its way even if it’s just a few baby steps that are visible today. Take the Pearl Street Mall in Boulder where we have a joint venture between Capital One and Peet’s Coffee, where the Capital One branch manager introduces himself (and passes out business cards) as the Café Master. Want to see more evidence on the continued disruptive convergence underway then go no further than your local provider of payments solutions software.

“We have been talking about omnichannels for quite a while now and all it’s really in response to is the customer experience,” said CEO of OmniPaymnets Inc, Yash Kapadia. “Banking customers and indeed retailing customers want seamless transition from their smartphones to whatever terminal is provided to complete a transaction.” Having them peer into a worn out screen just so that they can check the box NO when asked to donate to whatever current charitable fund is being promoted. “What we have been finding is that transaction types we used to just associate with banks are now being requested by retailers and when it comes to supporting loyalty programs, mobile wallets and even cryptocurrency access when it comes down to the features of any payments solution, the lines between what are requirements of banks versus retailers has definitely blurred.”

With a major presence in banks having one of the top five US banks recently transition to OmniPayments in support of their ATM and POS networks along with multiple ISO connections, where a billion transactions a month are processed by its software, it has been the retail market that has really come awake of late. And this includes the big-box vendors we associate with American’s Malls.

“There has been a huge uptick in interest in our offerings from retailers and in some emerging markets their use of OmniPayments is ahead of what even the most advanced bank in the US has deployed,” added Yash. “But are we really going to see the boundaries between banks, retailers and yes telcos come down and the charter for each morph to become more like each other, I am not so sure that this will happen in the near term, but history has a way of reminding us that yes, buggy-whip vendors are really in the transportation business and when it comes to cash and financial transactions, pretty much everyone can play and we are cognizant of this morphing as we add more features to OmniPayments.”

Ultimately, bankers and retailers will continue to do what they know best even as they continue to turn their eyes to the likes of Amazon, Microsoft, Google, Apple and even Uber and Lyft. PayPal, Square, and not forgetting the ambitions of WalMart and Target – as regulators will try to keep current as they cast a diligent eye over each new entrant to financial services. And of course, the rapid rise of fintechs is also casting its long shadow over traditional banks and retail stores as well.

Perhaps what we will not see is any moves to turn bank branches into shops even as by themselves, shops won’t offer checking, card and cash services. However, what cannot be ignored is just how topsy-turvy it’s all become and that providers of payments solutions need to be even more sensitive than they have ever been before that what may have been a feature solely for banking customers and prospects will no longer be the case.

A return to the Village Square may be just the starting point but should the retail industry convince us all that malls are going out of fashion and that we will all be gravitating to multipurpose gathering places like the Village Square then I sure want to be able to step into whoever I am now dependent upon for my banking needs no matter what sign may be hanging above the door.

Seriously, when it comes to cash in the end I don’t care where I get it – just keep your customer satisfied!