What adds up to $95 billion? Q3 for Google, Microsoft and Amazon 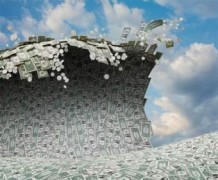 $43.7 billion for Amazon, $27.7 billion for Google and $24.5 billion for Microsoft, reports Telecoms.com (Banking Technology‘s sister publication). And it hasn’t even hit the Christmas sales period yet.

Admittedly the final quarter of the year won’t be as significant for largely B2B Microsoft, but with Google set to capitalize on internet searches and Amazon hording the lion’s share of online last minute shoppers, the tidal wave of cash is only going to get bigger. And looking beyond the next quarter, it is getting very tasty.

Starting with Amazon, net sales increased 34% to $43.7 billion in the third quarter, compared with $32.7 billion a year ago. This included $1.3 billion from Whole Foods Market and $124 million due to foreign exchange working out favourably. Net income was $256 million, a couple of million better off than 2016, but we’re pretty sure there wasn’t too many complaints.

Amazon is in one of the most enviable positions in the business world. The largest e-commerce business globally, the most prominent public cloud offering and a successful venture into video content subscriptions. These are the established businesses, when you throw in an assault on the traditional grocery industry, ventures into home entertainment hardware, dabbles in music and books, sports broadcasting projects, and, perhaps most significantly, the growing significance of Alexa in the home, this is a company which is set to take over.

The smart home is an interesting one, as this could define the next boom in the tech industry. We’re not necessarily talking about connecting your lights or asking Alexa to turn on your kettle, but the commercial relationships in the background. Asking Alexa to order you more toothpaste, or book a suitable restaurant for your anniversary.

Alexa is looking like a pretty strong contender to win the clash of the living room, but we have a good feeling about Google. This is another company which, funnily enough, had a successful Q3. $27.772 billion in total revenues for the quarter, an increase of 24% year-on-year, with net income at $6.732 billion. Just an extra $1.5 billion on top of the net income it brought in for Q3 2016, not a bad years work.

Google’s business is still primarily built around its search advertising dominance, supplemented superbly by its Android supremacy, both which could aid it in the clash of the living room. We believe the fortunes in the smart home will be made through monetizing the relationship between the user and third parties. As mentioned before, when you order toothpaste from Tesco’s or book a table at a restaurant, a business model will be built around referrals, featured spots and promotions, similar to advertising revenues in a search engine.

Amazon might have stolen top spot in the living room royale for the moment, but Google already has the existing relationships with every type of business, in almost every market in the world, through its traditional search business. Google is arguably in the best position to establish relationships on the commercial side of the smart home, as it is a case of up-selling or cross-selling.

The winner of this battle will be the one who becomes the default virtual assistant for the most people. Just like the social media race, initially it will be a pure numbers game, and the monetization will come further down the line.

Soon enough, all home entertainment devices will be enabled for virtual assistants, the Amazon and Google push right now is probably nothing more than a demonstration to traditional hardware players that there is the appetite for connected devices, they probably don’t harbour long-term ambitions in the hardware game. But once connected speakers are the standard, users will be able to decide which virtual assistant they want to use. Whoever wins the hearts and minds of the user will start to collect some serious cash.

It will be a gory battle, but we have a sneaking suspicion Google mind have the upper hand. Why? Because of Android. It is the dominant OS, meaning Google apps are preloaded on phones as the default, and the “do no eviler’s” are collecting serious amounts of data for personalisation. In theory, the virtual assistant should be more accurate, because of this training information, and the idea Google’s assistant will be the default on the majority of phones worldwide also gives it an upper hand. Amazon might have snuck in front right now, but Google has a better foundation to roll out its virtual assistant.

The final tech giant we are going to have a look at is Microsoft. The smallest of the trio in terms of quarterly revenue (but not profit or market cap), but considering it collected revenues of $24.5 billion, a 12% year-on-year increase for the quarter, and net income of $6.6 billion, a 16% boost, we don’t think it will be too disappointed.

Cortana is going to tie into the part of people’s lives which they don’t really like talking about (although some people can’t talk about anything else); work. It might not have as much of a focus on voice, but it will for productivity. With Outlook, Microsoft is already heavily in twined in the working lives of most people, so adding an intelligence layer which could be your assistant could be an interesting twist. Assuming of course Microsoft gets it right.

Another curious development is a partnership with Amazon. Before too long, Cortana and Alexa will working conjunction to marry your personal life with your work one. Allowing your virtual work assistant and your virtual personal assistant to work alongside could be a good angle which would benefit both companies and the consumer in the long-run.

Overall, Q3 has been very kind to the three major players in the technology world. We think virtual assistants could be the next major boom in the consumer technology space, and all three are gearing themselves up to harvest the fortunes available, admittedly in slightly different ways. $95 billion might look like a small number in a couple of years.