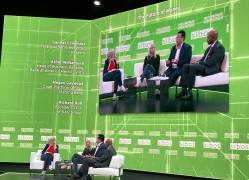 What’s more valuable today, data or money? Today’s “The Future of Money” discussion at Sibos had “the new oil” – data – firmly in its sights.

“Data is more valuable than money,” was an opinion of Richard Koh, founder and CEO of fintech firm M-DAQ Group.

But all three agreed: data needs to be applied and interpreted in a meaningful way that benefits both the customer and the financial institution.

“There is too much data out there, too much noise,” Koh said. And quite often, the interpretation of data can do more harm than good, if applied incorrectly. For example, a data analysis of ice cream sales on a beach in summer might show a spike in sales, Koh said. But if someone drowns in the sea by that beach, does it mean that the increased ice cream sales have caused it? Of course not.

“So the art of data science is not to collect more data, but get rid of the noise and analyse it in a meaningful way.”

We are now moving from the world of “Fintech 1.0” to “Fintech 2.0”, which, using data science, technology and culture, will “really reimagine banking”, Koh said.

This is the world where Starling wants to become “the Amazon of financial services”, Caywood said. “We are a tech company with a banking licence,” she stated.

“We are mobile-first and mobile-only,” she stated. The bank focuses on current accounts and the development of its Marketplace, which will enable customers to access a broad range of financial services (such as mortgages, savings products etc) provided by other entities, all via Starling’s mobile app.

The future has no place for physical branches for Starling, she commented.

BAML’s Williams, however, was less radical about brick-and-mortar. “It’s about balance of digital and physical,” he said. “Branches are not going to die.” Their purpose, though, is changing. BAML, for instance, has transformed its branches from transactional places to sales and advisory, to help clients deal with more complex queries and/or making big financial decisions (e.g. taking out a mortgage).

“Look at Amazon,” Williams said. “Whilst the company started as pure online, it is now opening physical stores.” Ouch, Starling.