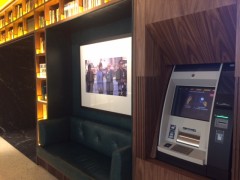 Openbank flagship branch. (If you look closely – MicK Jagger is on the pic)

Openbank, a digital banking subsidiary of Santander, has made its new core banking system decision – the bank has opted for Temenos T24. Infosys with its Finacle offering lost out in the final.

As exclusively reported by Banking Technology last month, Openbank was in the concluding stages of system selection.

Temenos says this deal is “material” and will be reflected in the Q3 financial results report (to be published on 18 October 2017).

Openbank operates in Spain and caters for the “professionals” segment by offering current accounts, savings, investment and lending solutions (including mortgages), debit and credit cards.

It has one million customers and over €6 billion in deposits. The bank aims to grow the customer base to 30 million in the next year.

The bank has been in existence for 22 years, but has recently gone through an enterprise-wide overhaul, from products and services, to technology, to corporate culture, to new branding. It has also opened its first brick-and-mortar branch in Madrid.

Earlier this month, Temenos issued a brief statement saying its solution was chosen by an unnamed Tier 1 bank for its digital banking operations – this is understood to be Santander with Openbank.