The European Commission (EC) has ruled that Luxembourg illegally let Amazon off €250 million of taxes and must now get them back, reports Telecoms.com (Banking Technology’s sister publication).

This is the latest round of a general purge by the EC of European countries effectively bribing US tech companies to use them as their European hub by dangling the carrot of reduced taxes. Last year the EC ruled that Apple owed Ireland €13 billion in back taxes, on which more later.

“Luxembourg gave illegal tax benefits to Amazon,” says Commissioner Margrethe Vestager. “As a result, almost three quarters of Amazon’s profits were not taxed. In other words, Amazon was allowed to pay four times less tax than other local companies subject to the same national tax rules. This is illegal under EU State aid rules. Member states cannot give selective tax benefits to multinational groups that are not available to others.”

On one level this seems fair enough; why should big companies get special tax treatment? On the other hand you could argue that if a country wants to use the tax system to generate local jobs then that’s its business, so this comes down to a matter of sovereignty. But unless countries are going to take the brave step of leaving the EU then they have to put up with it. Here’s a handy infographic if you’re struggling to get your head around the matter. 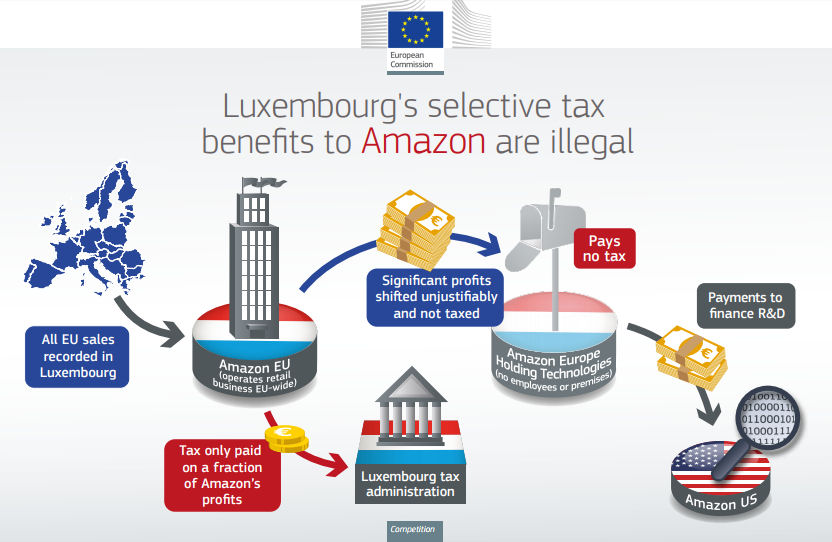 The EC has also piped up on the matter of Apple’s Irish billions, grassing Ireland up to the European Court of Justice (ECJ) for dragging its feet over the matter. Ireland politely disagreed with the original decision and accordingly doesn’t seem to have acted on it, hence the referral to the ECJ.

“Ireland has to recover up to €13 billion in illegal state aid from Apple,” says Vestager. “However, more than one year after the Commission adopted this decision, Ireland has still not recovered the money, also not in part. We of course understand that recovery in certain cases may be more complex than in others, and we are always ready to assist. But member states need to make sufficient progress to restore competition. That is why we have today decided to refer Ireland to the EU Court for failing to implement our decision.”

While it’s safe to assume the phrase “feckin euro eejits” may have been uttered at subsequent Irish cabinet meetings, it’s hard to see what alternatives they have. This escalation by Europe, however, may at least give Ireland more legal weapons to use in its bid to recover the cash and it wouldn’t be surprising if the sanctions against Apple start ramping if it doesn’t make more of an effort to resolve the matter.

Lastly, in other Ireland/ECJ news, the latter has been asked to rule on the case brought by Austrian lawyer Max Schrems, challenging the Safe Harbour/Privacy Shield system whereby US companies can transfer European data to the US. This specifically concerns Facebook which, by complete coincidence, is based in Ireland. We’ve no doubt it pays absolutely loads of tax there but Ireland has nonetheless asked the ECJ to make a ruling on the matter.