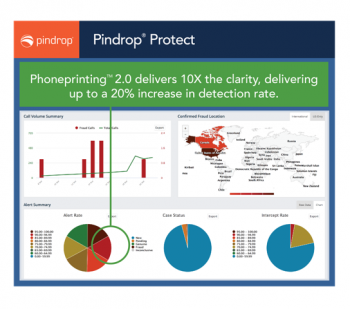 , an Atlanta-based voice security and authentication firm, has released Pindrop Protect 4.0, which includes its patented high-definition Phoneprinting technology that analyzes more than 1,300 features of a call’s audio to detect the subtle anomalies that indicate fraud, and determine the device type, geolocation and carrier.

Phoneprinting 2.0, coupled with accuracy enhancements in metadata analysis, delivers 10 times the clarity compared with its predecessor, Pindrop says. These upgrades enable Pindrop Protect to increase the detection rate of the “most sophisticated fraudsters by 20 percent.”

Call centers in the U.S. receive a fraudulent call every second, according to Pindrop Labs’ research. Fraud losses totaled $14 billion last year, and companies are spending an additional $8 billion annually on authenticating customers, the company says.

Pindrop’s technology is used in concert with machine learning and a customer consortium of shared fraudsters and anonymized fraud models that make it “highly accurate.”

“In the past few years we have seen fraud in the call center rise more than 200 percent and during this time we have seen the tactics fraudsters use becoming more sophisticated than ever before,” says Vijay Balasubramaniyan, CEO and co-founder of Pindrop. “Protect 4.0 combines six years of data, knowledge and insights to deliver a second generation hi-def phoneprint that will make it very difficult for bad actors to continue committing a faceless crime.”