Do you have a handle on your digital footprint?

It might seem obvious, but sometimes we just need to be reminded of how much information we give away without thinking about it, writes Banking Technology‘s sister publication Telecoms.com.

It’s what the digital economy is supposedly built on; information. Information about processes, functions and us. Companies was to know more about processes to increase efficiencies, functions, so they can increase the range of services, and us, to sell more stuff to us. But how much information are we giving away on a daily basis? The infographic below outlines some of the data which is being collected to build more detailed pictures on customers (thank you, Purple!).

But how many people actually realise they are giving away this information? Our guess is probably not many.

This in itself is one of the failings of the digital economy. By collecting this data and using it behind the curtain, consumers are scared when the wizard is finally unveiled. It’s why there has been resistance to the idea of third parties using personal information, and why there is often outcry when these behaviours are revealed.

Google perhaps dodged a bullet recently with this in mind. In the digital economy, there are few companies who have mastered the art of using insight to make money. Google is one of them, Facebook, Amazon and Sky are others. There are many who are trying to break into this exclusive club, but few have the monetary returns to justify the claim.

Most recently, Google has conceded to the European Commission, accepting a fine regarding the way search results are displayed for its shopping proposition, and promising to change its ways. Some might have been surprised the search giant accepted the monstrous €2.42 billion fine, but we look at it as a very intelligent move.

Imagine if Google had challenged the fine. All of a sudden, a slap of a sharp stick becomes a big deal. We’re not saying it wasn’t a big deal, but who is talking about it anymore? If Google has chosen to go down the legal route, there would have been analysis, in-depth discussion across social media and detailed explanations as to what was actually going on.

Media outlets around the world would be explaining to the general public why Google was facing such a fine. They would also be explaining how Google uses the mountains of information it collects on users to better personalise search results. The curtain would have been drawn and the face of data analytics would be seen. The man on the street would be debating whether Google has the right to use this information, down the pub people would be condemning an invasion of their privacy and in the press room, Googlers would be fighting fires everywhere.

But this in itself is the reason the technology industry is walking a fine line. Most would assume the general public don’t know about the mechanics of the digital economy. There is a lack of education which no-one seems to be happy about stepping up to remove.

Most people will know companies will be storing information on them, but the depth and detail of this data might scare a few people. Can the drawn curtain lead to a healthy and sustainable ecosystem? Or is the technology industry just setting itself up for a bigger fall? We’re not too sure.

So if you need a bit of a reminder, here are ten bits of information which you could be giving away, which you might have forgotten about. 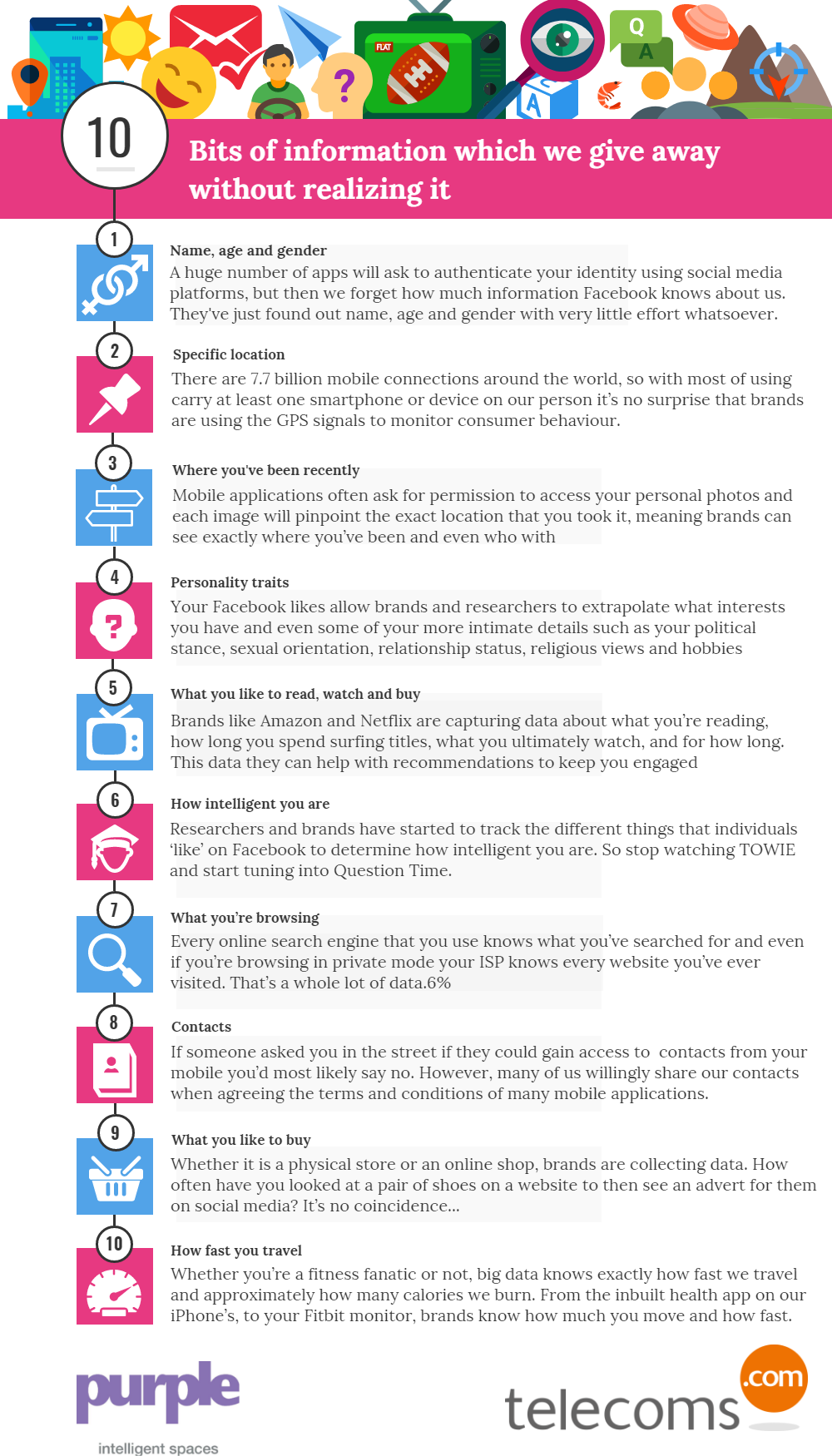