Blockchain vacancies in the UK increase by 25% with Britain posting three times as many jobs as Germany, according to the findings of Joblift, a job meta-search engine.

According to Joblift, 546 blockchain jobs have been posted in the UK since August 2016, with these jobs increasing, on average, by a fourth every month. For context, this monthly increase is huge in comparison with the 2% average monthly increase of the UK’s job market as a whole in the same time frame.

Another indicator of the rapid growth shown by this industry is the amount of time these jobs stay online without being filled. In the last 12 months, blockchain jobs have stayed open online for an average of seven days before being filled. This is less than half the time of the whole UK job market average – the median number of days that a job in the UK was active for since last August is 15 days.

London dominates in terms of UK cities with a huge 79% of all blockchain vacancies being located here. The UK capital has housed 429 positions in the last 12 months and the capital has seen an average monthly increase of 33%.

Edinburgh ranks as the city with the second highest number of blockchain jobs posted in the UK (11 positions). This comes after news that the University of Edinburgh will be launching Europe’s first blockchain university course this year.

The city that comes in third place in terms of blockchain vacancies is Belfast (nine positions), although – like Edinburgh – the Nothern Irish capital houses significantly less jobs than its English counterpart.

Germany has been regarded as the UK’s main European rival when it comes to emerging technology industries, particularly concerning finance, like blockchain. However, Joblift’s research shows that the UK has posted almost three times more blockchain vacancies than Germany has in the last 12 months (Germany has advertised 196 positions).

Looking more closely at the capital cities shows that London still trumps Berlin in both the number of jobs being posted and the rate of job market growth. Over the past 12 months, 429 jobs have been advertised in London which is 24 times more than the number posted in Berlin (18 vacancies). Also, Berlin has seen an average monthly increase of around 29%, while the number of jobs posted in London has increased by approximately 33% on average. 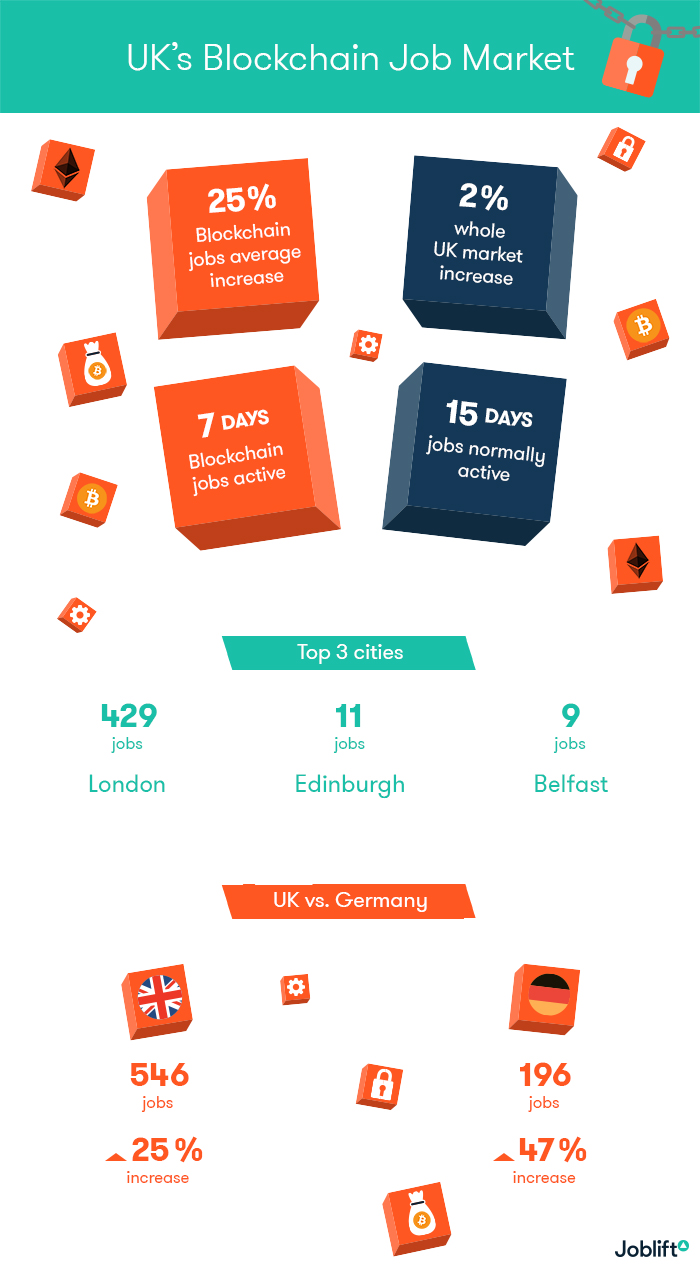