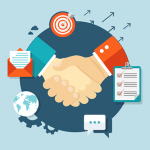 The partnerships keep coming for PayPal. Following recent news that the company is partnering with Apple for payments on iTunes and in the App Store, among other places, the company announced July 17 that it’s expanding its partnership with Samsung to enable PayPal as a payment method in any channel Samsung Pay is accepted, according to the PayPal blog.

Consumers in the U.S. will be the first to able to use PayPal within Samsung Pay at millions of retailers, according to Bill Ready, executive vice president and chief operation officer at PayPal.

PayPal processed $102 billion in mobile payment volume and 2 billion mobile payment transactions, according to Ready. “This partnership will give our customers the ability to pay with mobile almost anywhere consumers can swipe or tap a credit card, as Samsung Pay works in almost any in-store POS location in the U.S.”

The PayPal integration with Samsung Pay is supported on Samsung smartphones including the Samsung Galaxy S8 and S8+.

PayPal has been on acceptance partnership spree for the past year, inking deals with Visa, Mastercard, Discover, Apple and Google.