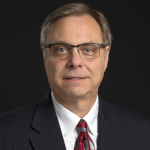 An early interest in credit cards hooked Jim Schafer on payments. Since then, his work has taken him across the globe in roles as diverse as programming and human resources. But it’s his current role as senior compliance director of FIS Payments that has led him to be named one of Paybefore’s Compliance Titans.

In the early days of his career, Schafer was fascinated by the myriad ways banks marketed credit products and related services. The area was full of challenges, such as ensuring a single system could work for financial institutions adhering to different business rules.

“One of the first projects I managed was developing the software used to launch General Motors’ GM Card,” Schafer says. “For this product, points earned could be applied toward the purchase of a new car.” This led to an 18-month project in Sydney, where his daughter, named after the city, was born.

Schafer’s journey, which saw him begin as a Medicaid and Medicare systems programmer, soon moved into human resources. In 1984, he moved to Atlanta, and about five years later he joined a startup called First Bankcard Systems (FBS).

“With FBS, I helped develop a credit card software system that we marketed both domestically and internationally,” Schafer says. “After earning my second client I was asked to become a project manager. For the next 12 years, I worked as an implementations manager, enhancing and installing our credit card software in banks around the world.”

From there, Schafer shifted roles to become a development manager and product manager, before eventually moving on to become a compliance and policy manager for the company’s North America division. This job led him to his current position at FIS, implementing payments products in the U.S., U.K., Scotland, Thailand, Brazil, Canada, Hong Kong, Australia and New Zealand.

“Our biggest challenge is keeping up with the pace of regulatory changes,” Schafer says. “Not only regulations at the U.S. federal and state level, but global regulations as well. There’s also the ever-present concern of protecting data—for us, our clients and the consumers. With over 28 billion transactions, and over 250 products and services, there’s plenty to stay on top of.”

To that end, FIS conducts three conferences a year where clients can learn what it means to be secure by design, Schafer notes. Called “In-Depth,” these conferences delve into overall industry controls, security and regulatory concerns, and best practices to achieve sustainable security.

He takes pride in his work as one of the first members of the Regulatory, Information Security and Compliance (RISC) liaison program at FIS. The program was established to provide a single point of contact within each segment of the company. A contact is provided to corporate risk, security and compliance teams and all business leaders to facilitate the completion of these initiatives and make FIS more secure.

“As RISC liaisons, we are accountable for risk, information security and compliance-related issues, audits and activities within our division,” Schafer notes. “My team facilitates over 200 audits and assessments each year.”

In 2016, Schafer won a Brucie Award. Named after division executive Bruce Lowthers, the award recognizes individuals in the FIS Payments division that have made a difference in their focus areas. Schafer was recognized for his dedicated focus, improving and establishing both risk and security controls within FIS Payments.

“In the ever-changing regulatory and compliance landscape, he has remained agile in his deployment of controls, while stringent in adhering to the requirements. His knowledge and level-headedness made him an obvious choice for the award,” says Head of International and Chief Administrative Officer of FIS Payments Serena Smith, who presented the award.

On a personal level, Schafer strives to meet the FIS corporate standard that encourages giving back. He has completed three half-marathons and helped raise more than $1.5 million toward leukemia and lymphoma research.

He also has been lucky to golf some of the most famous courses around the world, including the Augusta National in Georgia. “If I only had one more round of golf left to play,” Schafer says, “I would want to play it at Augusta.”