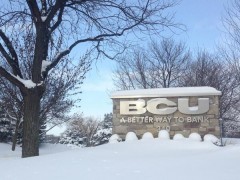 Is it Christmas yet?

The new branches will be in remote locations. More than 65% of BCU members are not located near a branch, the credit union says.

Carey Price, SVP and chief retail officer at BCU, comments: “With our mobile-first mindset, we looked for a simple-to-use video platform that would run across mobile and desktop applications and varying network connections – which made Vidyo the right fit for BCU.”

BCU has $2.8 billion in assets and around 200,000 members across the US and also in Puerto Rico. It says it has been the “fastest growing credit union in the last 30 years”.

For its technology, BCU is a long-standing user of the Episys core banking system, provided by Symitar, a Jack Henry & Associates company.

FIVE explores the possibilities that voice-based personal assistants such as Amazon’s Echo and Microsoft’s Cortana can bring to banking. Episys core processing system has been integrated with these voice-response systems to enable banking customers to conduct digital banking operations via voice commands.