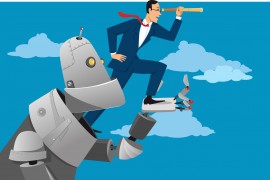 Banking and financial services (BFS) have always been subjected to strict regulatory oversight, by a multitude of local and global regulatory bodies across jurisdictions. Regulatory compliance is an ongoing activity for banks and financial institutions (FIs), which commands a sizeable amount of manual resource deployment and operating cost.

No wonder then that a large chunk of operations related investments as well as senior executive mindshare are focused on streamlining these processes, to enhance operational efficiency while reducing cost and turnaround time.

The regulatory compliance environment is as dynamic as it is complex, and highly dependent on consolidation and analysis of massive amounts of data across lines of businesses. Compilation of most regulatory reports in banks and FIs is currently done manually, as inputs are collated from multiple lines of business in various formats and from several systems. Manual processing of such vast amounts of data, coupled with fragmented and legacy systems, compound the problem of data aggregation for regulatory reports, thus impacting their accuracy and quality.

The emergence of robotic process automation (RPA) promises to automate such manual tasks, with a much higher level of accuracy and productivity by using digital workforce instead of human workforce, at a fraction of the current operating cost.

This articles explores how the RPA powered digital workforce looks to disrupt the manual effort intensive regulatory compliance landscape in BFS, what edge it has over its human counterpart, the roadmap towards RPA driven compliance, challenges in this digitisation journey and success mantras, and innovations that are underway towards building intelligent RPA to replicate human decision-making.

Emergence of RPA and the digital workforce

Robotics based automation has brought about a disruption in the human intensive industries like engineering, utilities, telecom, legal, insurance, banking and so on. From self-driving cars to virtual customer service assistants, digital claims processors and customer onboarding analysts – RPA has truly reimagined the way routine repetitive, manual rule based tasks can be carried out by software robots, requiring limited human intervention only where a judgment or discretionary decision making is warranted!

RPA is fast gaining acceptance across industries, for automating their manual processes which can be delegated to software robots, as it has generated quantifiable benefits in a reasonably short period of time, sometimes within three to six months of going live on RPA! While productivity of impacted functions have shot up by an average of 40-50% in most cases, cost of a digital resource has been found to figure around just 20-35% of a human resource. Software robots work much faster than human workforce, operate 24x7x365 with no time-zone dependency, and produce more accurate results. An added benefit is that digital workforce is easily scalable, as thousands of robots can be trained simultaneously, enabling faster deployment as compared to human workforce, thus increasing business agility.

And above all, RPA is non-invasive and does not require the underlying legacy systems to be changed, does not store any data accessed from different systems, and has a quick deployment cycle ranging from one month (for low complexity processes) to three months (for high complexity processes). As organisations are appreciating the value RPA brings, the RPA market size has been witnessing a phenomenal growth, from a revenue (of RPA vendors and service providers) of around $120-130 million in 2015 to $210 million in 2016, and projected around $ 700 million by 2018!

The global compliance landscape in BFS is expansive, covering a huge number of regulations around finance and risk management functions, spanning across KYC, monitoring transactions against potential money laundering or fraud, financial reports, risk assessment and exposure reports, periodic disclosures and so on. Most of these functions are manual in banks, which makes these activities time consuming and susceptible to errors.

Banks are constantly looking to improvise their regulatory compliance processes, for optimising costs while ensuring adequate oversight and accurate reporting. The success of RPA in the last couple of years, in automation of routine rule based operations for trimming down costs while increasing productivity of organisations across industries, has compelled Banks to turn their attention to similar processes in compliance. The possibility of entrusting RPA’s digital workforce with the “swivel chair” processes of compliance and regulatory reporting – around gathering data and information from multiple systems, and also from unstructured emails, manually compiled reports, and spreadsheets etc., processing those inputs using rules, and then entering the outputs into another set of systems like ERP, CRM, MIS or regulatory reporting – sounds promising!

RPA is now being considered for automating KYC operations in banks, while AML and fraud alert case management are also strong contenders for RPA. Risk management functions like credit limit evaluation and causal analysis of limit breaches, identification of exposure movements and business justifiable causes for the same, can be explored for transitioning to RPA’s digital workforce.

Compilation of periodic regulatory disclosures around capital adequacy, risk exposures, asset quality and other Basel III mandated disclosures are also amenable to robotic automation, which can be reviewed by a human before submission to regulators.

Reports that need to be submitted to regulators periodically, e.g. FINREP and COREP in the UK, statutory reports mandated by FRB and FFIEC in the US and so on, require massive amounts of data collation from multiple sources, and days of compilation activity before they are finally submitted. These regulatory reports can also be good candidates for Banks’ RPA programmes. Even standard risk reports like top 50 counterparty report, and regulatory information required for CCAR stress test, which are bulky and manual effort intensive, can be handed over to software robots for aggregation of required information.

The potential that RPA has in automating the regulatory compliance functions is immense, and with software robots already making inroads into this space, this next generation technology is on its way to becoming a major disrupter in the banking compliance space!

Overcoming challenges: the roadmap to global RPA adoption in compliance

Though most of the RPA implemented in BFS have been around contact centre and back office operations automation, banks which are among the early adopters have faced several challenges in RPA deployment, which are universal in nature and their lessons learnt can be used by potential adopters entering the RPA compliance space as well. One of the major challenges has been the lack of standardised processes and documented workflows, which form the bedrock of RPA modelling.

RPA development teams had to work with business teams of banks, where each team lacked an understanding of the other’s requirements, at times leading to confusion and deadlock in progress. Transitioning from manual to RPA processes were often plagued by lack of organisation change management initiatives – changes to processes, workflows and delivery model, when not communicated across the organisation, led to conflicts and resistance.

Deployment of RPA in regulatory compliance functions will also result in significant change in banks. So banks need to define revised governance structures with role clarity of the manual staff who would be displaced by RPA’s virtual staff. An exhaustive change management programme to educate the employees can go a long way in a smooth transition. Preparatory activities before embarking on an RPA programme must include standardisation of processes, and optimisation wherever possible. RPA awareness programmes and trainings can be conducted for the banks’ business teams, to align them with the objectives and requirements of the automation initiative. This will enable them to connect better with the development teams, and ensure faster progress.

While the concept of process automation has been around for a long time, robotics based process automation has remarkably transformed businesses since its emergence over the last two to three years. Organisations in North America have been among the early adopters of RPA based transformation, followed by those in UK, and then those in the APAC region.

Europe, the Middle East and Africa are still warming up to this innovation, and slowly creating RPA footprints in their process transformation initiatives. Among industries, BFS and insurance have been the predominant adopters of RPA, followed by healthcare and telecom, with the retail and travel industries quickly catching up.

In BFS, the focus of robotic automation is now sharply moving towards regulatory compliance functions, and is destined to revolutionise the compliance landscape globally in the next couple of years. While banks in North America and UK have already kicked off RPA initiatives in their compliance programmes, those in APAC are expected to follow suit soon – the motto clearly is “disrupt or get disrupted”!

The road to digitising compliance functions with intelligent RPA

In a very short time since its inception about three years ago, RPA has traversed a long journey. From an initial “assisted” version to the current “unassisted” version, RPA technology has brought about significant business impact in automating repetitive rule based tasks, which involve a low degree of complexity but are high in volumes.

However, the tasks which require human judgment and analysis are still being done manually, as robots cannot think and decide on their own. This has triggered a new challenge in the technology world – to develop intelligent robots, with cognitive skills, which can learn and make decisions just like humans!

The next generation cognitive RPA is envisioned to have inbuilt artificial intelligence (AI), with natural language programming (NLP) and unstructured data processing skills, that will enable it to carry out judgment based tasks and not depend on human supervisors for the same. High complexity tasks which may be low in volume can then be transitioned to cognitive robots. Analytics – both predictive and prescriptive – is also being strongly considered to be built on the cognitive RPA framework.

While RPA has been evolving from being a tactical solution to a strategic one for process and cost optimisation in banks, cognitive RPA can be predicted to dominate the digital innovation strategy in regulatory compliance in the near future – the journey has just begun!