Amid Brexit, London Keeps its Fintech Glow—but Berlin Might Change That 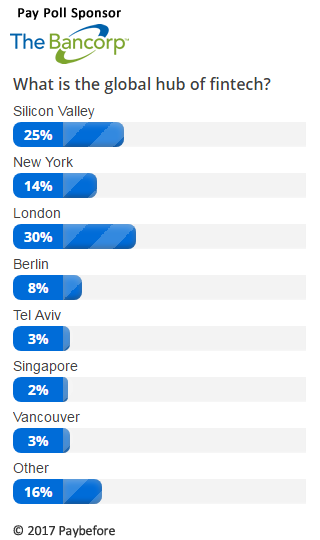 Score one for London. Even as the U.K. prepares to leave the European Union through Brexit, the British capital and banking and investment center stands as the global hub of fintech, according to Paybefore readers.

The results of a recent Pay Poll—new polls are available on the front page of Paybefore.com beneath the Featured Video on the right side of the screen—showed that 30 percent of survey respondents consider London the global head of fintech. That edged out Silicon Valley, at 25 percent.

The Pay Poll findings, albeit unscientific, offer a glimpse into the thinking of payment industry professionals and veterans. What’s more, they roughly echo March’s release of the “Global Financial Centres Index” from Z/Yen, a British consultancy.

Using 101 points of assessment, the study found that London remained the top global financial center, followed by New York, Singapore, Hong Kong and Tokyo. But in the aftermath of Brexit, London lost 13 points in its total score compared with the previous study in September 2016.

“Will Brexit be enough to alter that picture fundamentally?” asked Howard Davies, chairman of the Royal Bank of Scotland, in a recent column in The Guardian. “It remains hard to say. On the key factors for firms, London’s nationality-blind regulatory system is not likely to change; nor is the court system. So those advantages should be sustained.”

Other British officials also express optimism, even as they verged on cheerleading. “I want Britain to continue to foster even more fintech startups,” said Simon Kirby, a member of parliament who serves as economic secretary to the treasury, in a recent statement. “Barclays’ plan to launch the largest fintech co-working site in Europe here in London is a welcome part of this. The accelerator will host over 500 people working across 50 fintech startups here.”

Burt London will likely face European competition for fintech firms as Brexit proceeds. Most analysts single out Berlin as London’s main potential competitor. The German capital already hosts nearly 100 fintech firms, a number expected to double by 2018, according to Stefan Franzke, CEO at Berlin Partner, a business development agency. That growth will come mainly from German firms but also from Asian and U.S. entrepreneurs who want a firmer foothold in Europe and are nervous about how Brexit will affect the fintech situation in the U.K., he said.

To access Paybefore’s complete history of Pay Polls, click the Industry Speaks section of our Web site. To take part in our latest Pay Poll—about the best growth potential for payment verticals in the coming years—go to Paybefore.com and scroll below the Featured Video offering on the right side of the page.