On 16 January 2017, the Australian Prudential Regulatory Authority (APRA) released for public consultation its Economic and Financial Statistics (EFS) Form Review. Notably, this consultation package represents a major overhaul of many of the financial and statistical returns currently prepared by the Australian authorised deposit-taking institutions (ADIs) as well as introducing a new set of returns to be submitted.

This major announcement represents a significant change to the regulatory reporting regime and will have a dramatic impact on all Australian ADIs and the related technology required to manage these changes. Here Douglas Cheung, regulatory product manager, and Thomas Verlaet, product specialist, at Wolters Kluwer’s APAC finance, risk and reporting business, examine what’s at stake.

The EFS review constitutes a wide-ranging update to the statistical data collection demands from the regulatory body. As 15 years have now passed with APRA implementing few changes to the current reporting suite, the regulator is now taking aim at “modernising” the current framework in what APRA has highlighted as a significant gap between outdated data collection and evolved regulatory requirements both locally and abroad. Included in the sweeping changes are requests for more granular data and new forms in what would be a three phase implementation spanning across two years, requiring parallel and trial periods running through 2018 and 2019.

The table below summarises the consultation package proposals. ADIs will need to broaden the range of information provided in relation to areas such as lending, deposits, fees, counterparty information, and derivatives. There is also a focus on residency, sectoral and industry classifications within the update, one of the weaknesses APRA highlighted with the current framework and something that APRA has invited banks to respond to with regard to the difficultly of meeting the new classifications. To further compliment the new framework moving forward, APRA is considering holding industry workshops, conducting site visits, and introducing additional D2A validation rules. 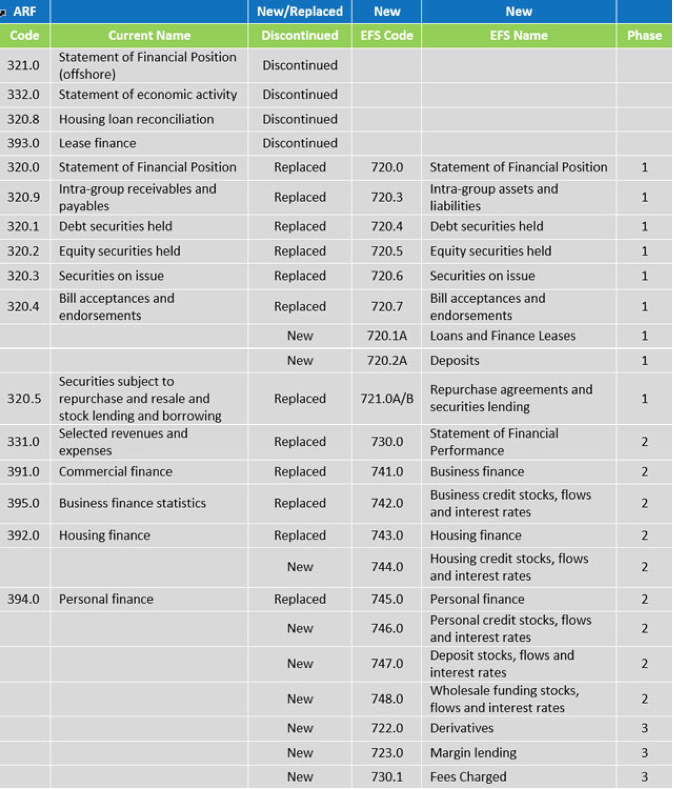 The scale of the changes is not surprising given the global events and regulatory developments that have transpired, particularly since the global financial crisis (GFC). Although the Australian economy was perceived to have weathered the GFC, the government led Financial System Inquiry (FSI) gave rise to the very clear message that the Australian financial system must endeavour to attain an “unquestionably strong” status.  Since then, not only have Australia’s international banking peers improved their standards, therefore putting even more pressure on achieving that goal, but Australia continues to operate in an environment of an overheated housing market and high debt levels, the same conditions that led to the GFC in the first place.

APRA also highlights data quality and cost benefits as other reasons for the review. ADIs have often raised concerns surrounding duplicate information in their submissions, and APRA has attempted to address these concerns through stream lining of the forms and further clarifying requirements. These efforts from APRA are in part a response to the high number of data revisions received by APRA in recent years, and a need to ensure that ADIs can provide more granular data whilst also reducing the overall reporting burden, which is a tricky balancing act. APRA therefore invites ADIs to provide feedback on whether they can realize cost savings from the changes, following which APRA will perform a cost benefit analysis.

The EFS review however isn’t just about modernisation and cost savings, it’s the refinement of APRA’s monitoring efforts by which the regulator can better prudentially manage the financial community. It’s a sharpening of surveillance tools that help APRA play its role in ensuring financial stability, efficiency, and competition. To that end, the benefits APRA will gain from this initiative will most likely outweigh the additional cost to the industry that may be highlighted in responses to the discussion paper, and will continue the banking industry’s struggle of compliance with ever evolving regulatory change. Even banks that respond positively to the new overall structure of the forms will most likely respond negatively to the long parallel reporting periods which will force institutions to begin changes much sooner than is suggested by the effective dates. This possibly isn’t the last we hear from APRA either, considering that capital adequacy reports were not part of the review, and that Basel 3 continues to make ground with speculation of Basel 4 to follow on soon after.

The public consultation APRA announced arguably represents the largest update on its reporting regime since 2001, when it introduced the D2A platform and many of the forms currently in place. The changes come on top of the earlier announced changes to the submissions for International Exposures (ARF 231/731) and Residential Mortgage Lending (ARF223) which were announced in 2016 and are to be reported in Q4 2017.

Responses to this public consultation are to be provided by 18th April 2017.