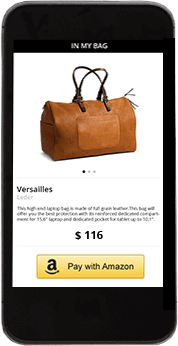 In yet another sign that simplifying checkout for consumers is key to driving e-commerce payments, Amazon on Feb. 7 said that more than 33 million consumers have used its Amazon Payments service since its launch in 2013—and that the volume of payments “nearly doubled” in 2016 compared with the previous year. But don’t count on the e-commerce giant to be content with online payments alone.

Amazon Payments enables shoppers with card-linked Amazon accounts to use them to buy goods from other retailers. Recently, Amazon has deployed the service to in-store payments, including at luxury clothing e-retailer Moda Operandi and Amazon Books physical stores in six states (two more states are scheduled to get similar stores later this year).

Amazon Payment’s recent growth came not only from those stores but through expansion in France, Italy and Spain, and via such segments as “government payments, travel, digital goods, insurance, entertainment, nonprofits and charities,” Amazon said.  Last year, Amazon Payments became the third digital wallet service consumers can use to pay the federal government, joining PayPal and Dwolla.

“As we have introduced new experiences with merchants, we have seen a significant increase in the number of customers using the information from their Amazon account to make purchases on merchant Websites,” said Patrick Gauthier, vice president, Amazon Payments.

Amazon did not detail how many merchants accept Amazon Payments but did say its merchant base increased 120 percent last year. Customers from more than 170 countries used the service in 2016, and more than half of those users also belong to the retailer’s Amazon Prime shipping and loyalty program. Additionally, 32 percent of purchases made through Amazon Payments came from mobile devices last year. The single largest transaction made through Amazon Payments last year was $40,000—Amazon did not immediately say what the purchase was—though the average transaction stood at a much more modest $80.

The growth in Amazon Payments comes amid an increasingly profitable time for North America and Europe’s largest e-retailer as measured by revenue. Amazon’s global sales hit $136 billion last year, a 27 percent increase over 2015, according to the company’s most recent financial report. Net income grew 300 percent, to $2.37 billion, thanks in large part to strong holiday sales. Slice Intelligence, in fact, estimated that Amazon accounted for 38 percent of all U.S. e-commerce sales during the 2016 holiday shopping season.