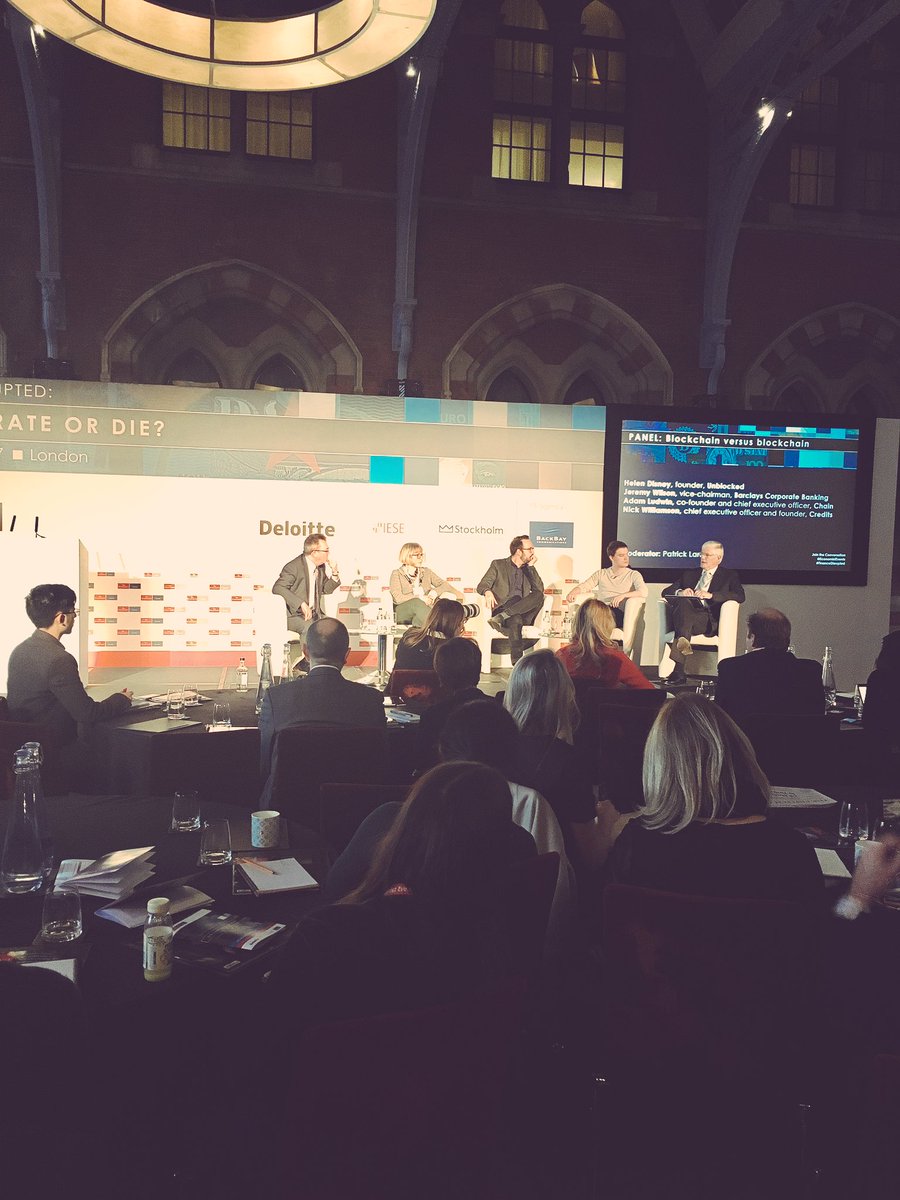 Like a charming European fairy tale, questions over who shall inherit a crown and become the new ruler were raised.

At the Economist’s Finance Disrupted conference, “Collaborate or die”, held yesterday (25 January) in London, the city’s pre-eminence in the fintech field fell under scrutiny.

Initial discussions looked at why this metropolis is such a fine fintech centre. For Eileen Burbidge, the UK government’s HM Treasury special envoy for fintech, it boiled down to its “access to customers and capital, technical expertise, a great policy regime and progressive regulations”.

The panel generally backed this view up, with Lawrence Wintermeyer, CEO at Innovate Finance, pointing out that half of all venture capital in London is foreign. They are attracted here by its openness, and he praised the Financial Conduct Authority (FCA) and Payment Systems Regulator (PSR) for how well they work with start-ups and financial institutions.

This is where the city stands now, but the question of the “single market” came up in terms of Europe and, of course, Brexit.

Nicolas Véron, senior fellow, Bruegel; and visiting fellow, Peterson Institute for International Economics, took on the role of contrarian-in-chief and always questioned London’s current standing and future. He believes that while Europe’s digital and financial services industries are fragmented, the EU is looking to rectify this and deepen integration. Also, in Véron’s view, Silicon Valley “holds the crown for financial services”.

There is also the issue of housing – yes, this can have an impact according to Olle Zetterberg, CEO, Stockholm Business Region. The shortage of properties in London could mean firms can’t attract new talent.

For those who believe a US city should be or is number one, Burbidge points out it has “disparate markets” – and doing business there means “having to deal with states on a case by case basis”.

Back to the shadow of Brexit. The questions of whether fintech firms need a passport to operate in the rest of the EU or whether they will move their headquarters from London to another city cropped up. (UK citizens already need a passport to move within the EU as we have not signed up to the Schengen Agreement.)

In Wintermeyer’s experience, only 20% of companies need a passport – “few really need it”. But he concedes that “talent is the number one concern in the fintech community”.

With the UK waving goodbye the EU, this has created uncertainty in the job market. The changes may well be incremental. Brexit has created negative images on the freedom of movement.

Ultimately, all this talk did not reveal any clear usurper for London’s fintech crown. In Zetterberg’s opinion “London will be OK for the next few decades”.

This is a kind of happy ending for our fintech fairy tale. 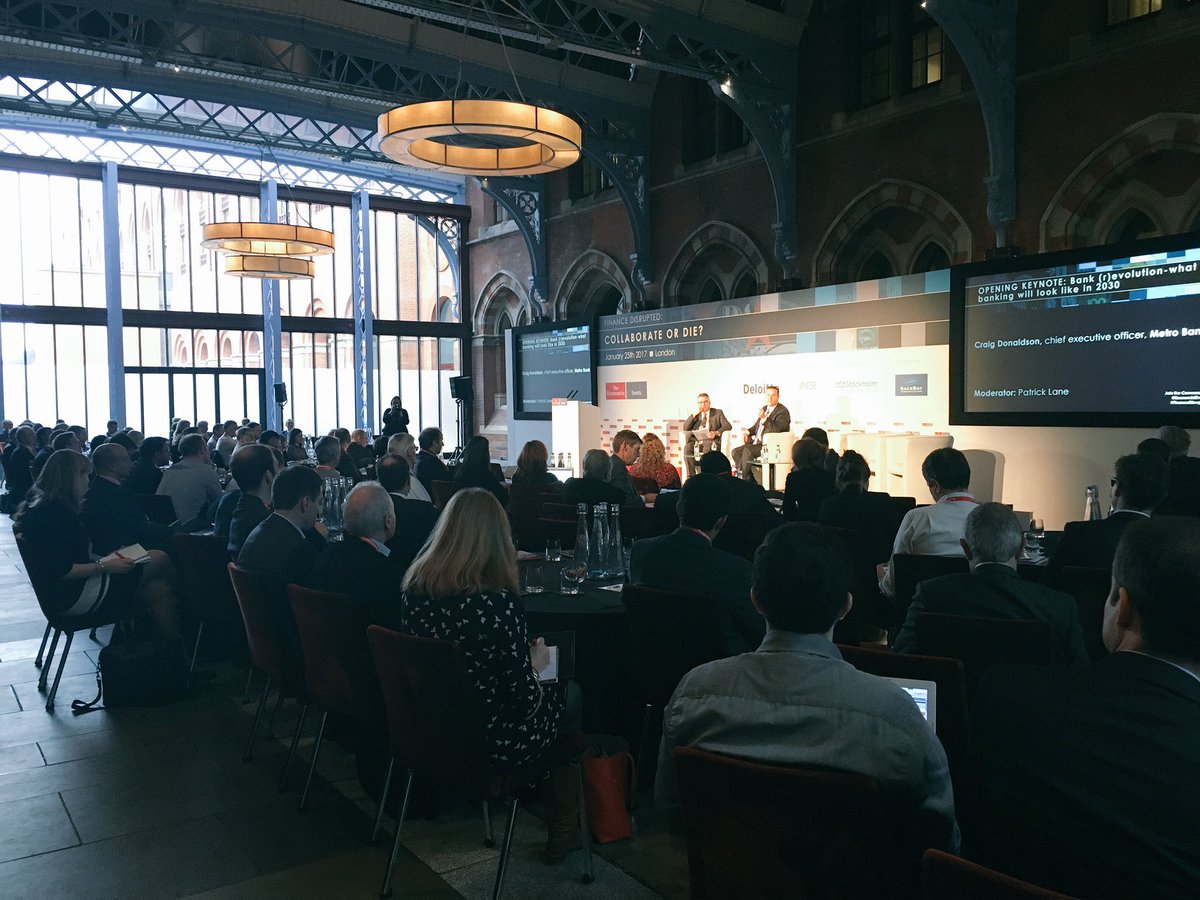 Other tales to tell

Elsewhere, the event threw up the usual mix of panels, predictions and punditry. A few points of interest came up.

Craig Donaldson, CEO of Metro Bank, looked at banking in the year 2030. The bank calls its branches “stores” and while branch cuts in the UK are happening at an alarming rate, Metro has other ideas.

Donaldson often cited digital and physical integration, and he says for this integration “we don’t need 2,000 stores but I reckon 250 stores for national coverage”. An interesting statistic, and good to see he was specific. Too often we are given vague ambitions.

In a panel on “blockchain versus blockchain” there was none of the drama of the movie “Kramer vs Kramer” but as people having been saying at other events, the hype is over – “we are now getting to the stage of what it will mean”.

Finally, away from the panels, Banking Technology did an interview with Oliver Hughes, CEO of Tinkoff Bank. There will a feature at a later date on his views and the Russian bank’s ambitions.