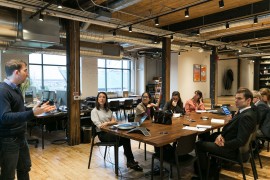 Ontario in Canada is calling for more venture capital to come to the region as it looks to boost its fintech industry.

This is the main message from a tour of Toronto, given to the international media by the Ministry of Economic Development and Growth (MEDG).

At yesterday’s (6 December) meeting, Giles Gherson, deputy minister for MEDG, explained how Ontario is open to fintech and wants to attract more talent.

But this was not just about Toronto, Gherson says its “super corridor” of Toronto-Waterloo is comparable to the more famous Silicon Valley.

Gherson says banks in Canada are now embracing fintech as they “figure out how to deal with the upstarts”. The latter phrase may be another way of describing start-ups.

He says access to capital is a “big issue” and the MEDG wants more venture capital in the region.

When Banking Technology asked Gherson where Canada sits in the fintech ranking of countries, he wouldn’t go into specific numbers but says it is in the “top tier”.

Gherson adds that Ontario is “now anxious to grow fintech” and “the tone has really changed as the five biggest banks in Canada want to acquire or work with fintechs”.

Also doing a presentation was Chris Lau, senior advisor at MEDG (and a former Silicon Valley engineer), who explained the business case. Far too many statistics or points to mention, but the region offers “a robust tech culture” and “stability”. It also offers incentives – such as discounts for R&D costs and has its “OSC Launchpad”. The latter is a regulatory sandbox launched by Ontario Securities Commission this year. It is similar to the UK’s Financial Conduct Authority’s version.

As presentations go, both were very good and brief. The bottom line is that MEDG is very open to discussions. 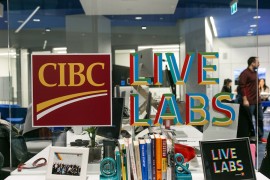 After the MEDG chinwag, the tour got mobile. Some of it involved meeting fintech firms scattered across Toronto, while the other part was a visit to the MaRS Discovery District. The name MaRS comes from its initial purpose for “medical and related sciences”, but now firms in MaRS work in other fields – with fintech being one of them.

MaRS is located next to Toronto university and taps into that young talent pool. It is also home to PayPal Canada, where Alexander Peh, its head of market development and mobile, explained the virtues of working at MaRS and a few other points.

Peh says PayPal has been in Canada for ten years and has 6.4 million active users. He explains that “only” 20% of Canadian businesses are online, so clearly lots of potential there.

After PayPal, Adam Nanjee, head of fintech at MaRS, explained what it offers and introduced CIBC’s Live Labs.

Nanjee says start-ups pay no fees and rent is subsidised; and MaRS takes no equity in the firms. He is keen to attract more companies to the district.

CIBC is doing what a lot of banks around the world do. That is, ditch the suit and tie, set up an innovation lab outside of the bank, and work with young talent. It has a team of 16 people and every six months it works on a new project. An example provided was its Apple watch – its first banking app on a wearable.

It was a fast moving day, and other firms that have benefited from the MaRS touch, showcased their achievements and ambitions.

These were Thinking Capital, an SME lender founded in 2006, and which partners with CIBC; Financeit, a mobile lending platform; and LowestRates.ca – a price comparison website for personal finance. 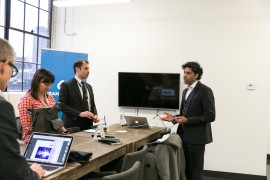 Away from MaRS, we met three other firms.

SecureKey is an identity and authentication provider – with investment from Visa, Mastercard, Discover Financial Services, and others.

Wealthsimple – an online investment management service founded in September 2014. As of December last year, it has over $400 million in assets under management (AUM).

Dream Payments – its cloud-based platform is combined with mPOS devices for merchants. It is headquartered in Liberty Village. Not as cool or spacious as MaRS, but still a place to get work done.

All three gave fine demonstrations as Ontario is keen to show the wealth of firms it has and what it can do. In my opinion, it is just as dynamic as the US, UK, Germany and Singapore.

It is worth nothing that as with Lau at the MEDG, the CEO of Wealthsimple, Mike Katchen, also worked in Silicon Valley. It seems that some Canadians are returning home – and with it, bringing their skills to give a healthy boost to Canada’s fintech scene.

Having spent the day travelling around Toronto, it is a great city. Clean, lively and certainly a fine place to live. It is often ranked high in those ubiquitous “liveable city” rankings.

But really it’s the people that help it stand out. They are the friendliest I have ever met – it’s that simple. From meeting the fintech firms, all of them were happy to answer questions in an open and witty way. Doing business here would probably be easier than many other places.

With MEDG, MaRS and everyone else showing how keen they are to do fintech business, now would be the time to contact them if you’re ambitious about getting it on in Ontario.