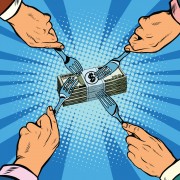 With so much fintech funding activity going on, we’ve summarised the latest fundraising efforts of start-ups.

“With the app out of beta in November 2016, this investment marks the company’s next step into the red-hot market of smartphone-based financial solutions for 15-30 year olds,” Lunar Way states.

The company says its interface resembles those of mobile apps, Spotify and Snapchat being the closest comparable. “This makes the user experience faster, with focus on intuition, convenience and accessibility,” the company explains.

Lunar Way was founded by Ken Villum Klausen in 2015. It has 30 employees, and its banking partner (and investor) in Denmark is Nykredit.

The app is available for iOS and Android.

The San Francisco-based start-up was launched earlier this year with $5 million from 30 investors. Carlson Wee recently told Forbes: “There will be many types of assets codified into the blockchain, and they are all not just going to be on the bitcoin blockchain – it’s going to be a number of different assets here. And the best way to invest in that is a diversified portfolio.”

Another blockchain-focused company, Ireland-based FXCH, is looking to raise €8.5 million in funding, including via a Seedrs crowdfunding campaign.

“It is a way for us to give back, allowing the crowd – private investors – to join our efforts in disrupting the markets,” he says. “I think crowdfunding attracts people who want to do things differently. By starting with crowdfunding, I think we send the right message.”