More branches and jobs to go at Lloyds Banking Group 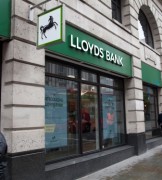 Soon to be gone from a high street

UK-based Lloyds Banking Group is getting rid of further 49 branches and 665 jobs. The bank will offer services via mobile vans to the communities affected by the branch closures.

Eight mobile branches will be put on the road in spring next year (Lloyds’ subsidiary in Scotland – Bank of Scotland – already has eight mobile banking vans).

Lloyds was bailed out in 2008 and has been on a restructuring path since. It has separated and sold its domestic retail business, TSB (now owned by Spanish banking group Sabadell) and is looking to shed 12,000 jobs and close 400 branches by the end of 2017.

The bank says that the branch use across its brands (Lloyds, HBOS and Bank of Scotland) has been falling 15% year on year – hence the closures are necessary.

Trade union Unite has stated its concern about the ongoing job cuts and branch closures, describing the situation as “alarming”. Rob MacGregor, Unite union’s national officer, states: “Unite have expressed to the bank that these ongoing cuts hurts our members and inevitably impacts customers.”

About 9% of Lloyds’ shareholding is owned by the UK taxpayer (in 2008, the stake was 43%). The government plans to get rid of the remaining stake in the next 12 months.

The Property and Casualty (P&C) insurance industry is being dramatically transformed by digital technologies that a… twitter.com/i/web/status/1…