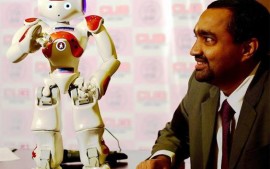 City Union Bank (CUB) has become the first bank in India to introduce a robot to deal with customer queries. Called Lakshmi, the robot is based on the IBM Watson artificial intelligence (AI) engine.

Lakshmi is based in a CUB branch in Chennai and is currently the only version of a “humanoid banker” CUB has got. However, there are plans to introduce 25-30 robots across the bank’s key branches by the end of this year if Lakshmi proves a success with customers.

Lakshmi speaks English, can gesture and engage in conversations. It can interact with customers on more than 125 subjects, including interest rates on loans and checking the account balance.

Lakshmi has been six months in the making. It has been programmed to connect to CUB’s core banking system – TCS Financial Solutions’ Bancs – which enables it to answer queries about customer account details and transaction history.

Sensitive information will not be voiced by Lakshmi, but instead will be displayed on its screen. “Lakshmi only talks out loud on generic subjects. If you visit our branch with your girlfriend, it won’t embarrass you by showing your low account balance,” jokes the bank’s MD and CEO, N Kamakodi.