ING cans Twyp mobile payments app in the Netherlands, but keeps it going in Spain 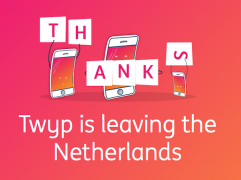 ING is pulling a plug on its peer-to-peer (P2P) mobile payments app, Twyp, in the Netherlands due to the lack of customer uptake. However, the app will continue to function in Spain.

Twyp, which stands for “the way you pay”, was launched last December, available for both ING and non-ING customers.

“Dutch Twyp users have told us they don’t need or want a separate app to make payments to friends,” ING says on the Twyp website. “This was difficult to hear, but we take all of your feedback seriously.”

The app will “say goodbye to the Netherlands” on 15th December 2016.

Customers are asked to withdraw money from their Twyp accounts before that date. Thereafter the accounts will be blocked and users will have to get in touch with Twyp’s customer services to get their money.