The size of the financially underserved market in the U.S. increased by nearly 6 percent in 2015, reaching an estimated $140.7 billion, according to a just-released study from the Center for Financial Services Innovation (CFSI) and Core Innovation Capital. The sixth annual “Financially Underserved Market Size Study” found that underserved consumers spent the above amount in fees and interest, generated by total spending volume of $1.6 trillion. Revenue was up 5.9 percent from $133 billion in 2014—in line with the average annual growth of 5.6 percent since 2009.

While an increase in fee and interest revenue is a short-term benefit to companies with products used by underserved consumers, it also means there are key opportunities for companies that can leverage technology to better serve those consumers, according to the report. “The fact that spending on fees continues to grow at a high rate shows a clear need for tech-enabled entrants to deliver low-cost solutions at scale,” noted Collen Poynton, vice president, Core Innovation Capital.

CFSI defines the financially underserved as consumers who meet all or some of the following criteria: are unbanked or underbanked (estimated at 67 million U.S. adults); are credit-challenged due to subprime scores or thin files (121 million); have low-to-moderate income (91 million); or face income volatility (54 million.) The report examined 28 products and services used by underserved consumers to spend, save, borrow and plan their financial lives. 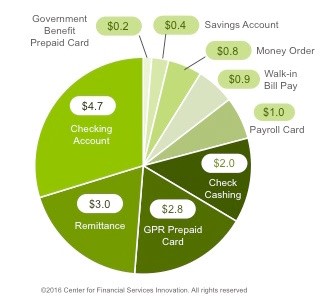 Among product categories, long-term credit accounted for the majority of the $140.7 billion in fee and interest spending by the underserved, at $55.2 billion, or 39.2 percent. Single-payment credit—loans for which payment is due in one lump sum, usually with a term of a month or less—ranked second, with $36.5 billion, or 25.9 percent, followed by short-term credit, comprising $26.2 billion, or 18.6 percent. Payment and deposit accounts drove $15.7 billion in revenue, or 11.2 percent, and other products and services rounded out the remaining 5 percent of overall revenue with $7.1 billion in fees (figures don’t add up to 100 percent due to rounding.)

Among payment products, GPR prepaid card revenue surged 12.1 percent over 2014, to $2.8 billion, while payroll card revenue jumped by 8.0 percent, to $1.0 billion. Both figures are projected to level off in 2016, to 7.3 percent and 3.3 percent, respectively. Meanwhile, government payment products, such as benefit cards, saw a 4.4 percent increase in revenue in 2015, to $200 million, but are projected to tick downward by 6.5 percent in 2016, according to the report.