RGCA Survey: Consumers Are Getting Smarter about Gift Cards 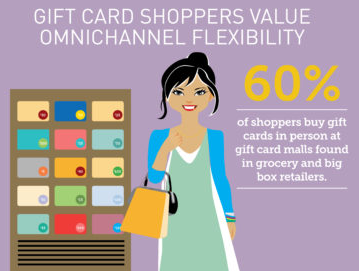 Consumers are getting savvy to the myriad ways gift cards can be used, given, stored and obtained. For example, though 46 percent of consumers surveyed still prefer to hand cashiers a physical gift card, nearly 14 percent would rather load, store and redeem gift cards using a mobile wallet, and 40 percent of respondents were amenable to using mobile or plastic methods, according to a survey released Oct. 24 by the Retail Gift Card Association (RGCA).

The study also described consumers’ awareness of gift card exchanges as “substantial,” with 40 percent of consumers having heard of Websites enabling them to swap one gift card for another, and 25 percent of respondents saying they’d consider using an exchange in the future. Consumers also are becoming aware of group gifting, in which several people can contribute to the amount of a gift card. One-third of respondents had heard of group giving and after all respondents learned of it, more than 40 percent would be interested in trying it, according to the RGCA’s independent online survey of more than 1,000 U.S. adult respondents conducted April 2016.

Consumers are taking advantage of the conveniences of electronic gift cards, too. The top reasons respondents reported buying an e-gift card was the need to have the gift delivered quickly (42 percent), they’re buying for younger people “who live a digital lifestyle” (23 percent) and because they want to avoid crowds (21 percent).

Approximately 75 percent of consumers plan to purchase plastic gift cards this year and one-fourth of respondents said they will buy e-gift cards. “We weren’t surprised to hear that gift cards remain incredibly popular, but what was a bit surprising was how many shoppers report buying gift cards for self-use,” Timm Walsh, RGCA board chairman, tells Paybefore. “One in three American consumers now buy gift cards for themselves; they say they do so to qualify for special loyalty deals or discounts [45 percent], or to help stick to a budget [35 percent].”

The RGCA survey also found that 60 percent of consumers buy cards at gift card malls in grocery stores and big box retailers, and half of respondents would be interested in buying gift cards from independent retailers in their neighborhoods if they were available.