Report: Consumers’ Use of Mobile Devices in Stores Stops at the Register

U.S. consumers’ usage of mobile devices in-store ranks as one of the highest compared with shoppers in other countries. However, their use of mobile devices at the POS drops dramatically, according to the 2016 FutureBuy report, which tracks trends in online, mobile and brick-and-mortar shopping. The results indicate that payments providers have work to do to convince shoppers m-wallets are worth the effort.

Consumers were asked where they last used a smartphone or tablet to help them shop and 37 percent of U.S. consumers responded, “in a store,” which ranked among the highest of the 20 countries surveyed. The U.K. was tops with 40 percent of shoppers. U.S. consumers reported using their devices to compare prices (25 percent), research product information (19 percent), read online reviews (17 percent) and check the availability of an item (14 percent). GfK, a New York-based market research company, released the report Oct. 25 based on its August 2016 online survey of 20,000 consumers, 1,000 respondents from each of 20 countries.

Yet, when it came time to take their merchandise to the checkout, a mere 2 percent of U.S. shoppers reported using a mobile device to make their purchases. To compare, nearly 25 percent of shoppers in China used their mobile devices at the POS. 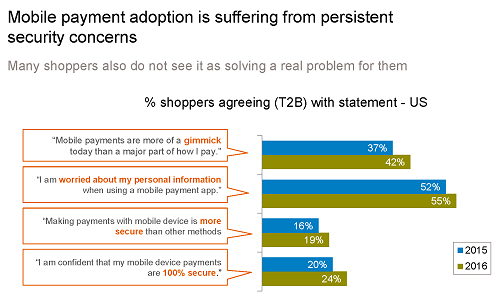 U.S. consumers can pay with their phones in-store, online and in-app, but there isn’t a comprehensive offering that resonates with consumers, according to Tim Spenny, senior vice president on GfK’s financial services team. “This is driving the perception that mobile payments is a gimmick, which has slowed adoption,” Spenny tells Paybefore.

“Consumers cite security issues, but having the security doesn’t drive behavior; a compelling consumer offering will drive adoption and usage of mobile payments,” adds Spenny. He points to successful mobile payments apps such as Uber, Airbnb and Starbucks. “We don’t see the same concerns about privacy and security. These apps are success stories because they solve consumer issues and remove longstanding pain points—hailing a cab, booking a hotel room or waiting in line.”

Security concerns among U.S. shoppers are persistent, if not “mostly unfounded,” Spenny says. The industry needs to improve communication on the security benefits of mobile payments. For example, there often is triple authentication to make a purchase and, through the use of tokens, no personal information is communicated during the transaction, he notes.

“This kind of messaging would help quell consumers’ concerns,” Spenny says. “The ‘Catch-22’ is that if you hang your hat on being secure and then there is some sort of breach, you’ve essentially removed your value proposition. A better approach is to marry a significantly improved consumer experience with a clear message of a secure platform through authentication and tokenization to compel consumers to adopt and use.”