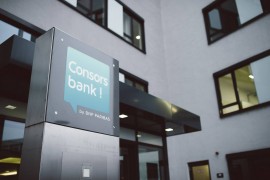 Consorsbank: the high stakes of a high performing banking app

New retail banking apps are released onto the market daily – from traditional banks entering the app era to new disruptive payments services. What does each one of these apps have in common? The need to perform.

A massive 85% of shoppers are unlikely to go back to a retail banking app after a bad mobile experience, according to a BoldTalk survey of 8,000 consumers across seven countries. Another survey showed that, of 2,000 people in the UK polled by YouGov, almost half (45%) said the promise of a faster and more convenient electronic payment service would encourage them to move their account to a different bank. This shows both a clear opportunity and threat – innovate to give customers what they want, or lose out to competition.

Fending off the competition
My team at Consorsbank, a German online banking company, created the next-generation, consumer retail banking mobile application. Where most retail bank applications only give customers the ability to check account balances, transfer balances and make payments, we wanted our application to go further.

In an effort to provide current account holders with a high-functioning app that’s capable of more than just a typical mobile retail banking app, we added the following features that allow users to:

Creating an app for the future
When we initially launched our mobile app in 2010, it needed to get to market fast. Our competitors were starting to launch apps, and as an online banking company, we needed to be there first. When we launched, we used our existing technology to quickly place banking in a customer’s pocket, but we knew it had to be better.

Our goal was to be a full-feature mobile app that combined the benefits of personal banking with trading. We wanted to take in market data from sources, analyse the data and distribute it to customers in real time. As part of this goal, we knew the app had to perform – it needed to be quick to load and quick to service fast data for trading. This requires front-end and back-end systems to communicate easily without introducing too much complexity.

When consumers use mobile devices, we never know the quality of the connection they’ll have (nor do they), but the app and bank can get blamed for poor performance. Initially, we were using request/response to service the web, but we wanted to move away from it for mobile. We wanted our customers to know the status of their request immediately so that if they were trading on the move, regardless of the connection, they’d know if a request had been processed successfully.

That’s when we knew we had to move away from a request/response model and look to a real-time data streaming solution for our mobile apps. This way, data could move across the internet from our back-end systems when our customers need it.

Finding the solution
We began by first understanding what data we needed to send to an app, collected requirements across the business and then put together key criteria. Our next step was to screen the market, which resulted in a list of 12 companies shortlisted down to two…

This is an excerpt. The full article is available in the October 2016 edition of Banking Technology.